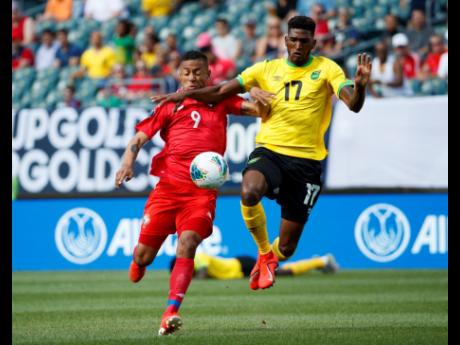 Jamaica’s Damion Lowe (right) and Panama’s Gabriel Torres battle for the ball during the first half of a Concacaf Gold Cup match in Philadelphia in 2019.

Now fully immersed in his first season with Egyptian Club Al Ittihad Alexandria, national defender Damion Lowe is pleased that he has played a part in a bevy of national players currently plying their trade on the African continent.

In a recent Youtube interview with Radio Jamaica Sports, Simon Preston, the 27-year-old centre back, discussed his experience in the Egyptian Premier League as well as his role in not only bringing countryman Romario Williams to Al Ittihad, but how Alvas Powell and striker Darren Mattocks found themselves in Africa to begin new chapters in their careers.

Lowe signed a two-year deal with the club last November and made his debut shortly after against league champions Al Alhy Cairo in the semi-finals of the Egypt Cup. Despite losing 2-1, Lowe said that his performance had the club interested in tapping into the market for national talent.

"They kept coming to me, saying, 'Hey, listen, when I ask agents for players they always bring Brazilians and Africans and people from everywhere else but Jamaica. We need more Jamaicans,'" Lowe said. "And I'm like, 'Hey, for us, we work hard, we want to make a living. We are not as valued in the North American continent as we are elsewhere, so if you want us, we are at a surplus right now. A number of players are out of contract. Big opportunity for the clubs here to bring them over.'"

It was an opportunity that Al Ittihad took advantage of, as Williams joined Lowe soon after on a two-year deal, and through other conversations and recommendations, Powell and Mattocks joined the joined Sudanese league with Al-Hilal and Al-Merrikh, respectively. Lowe said that others were supposed to arrive, but the moves fell through. However, he is encouraged with the interest that clubs are showing in Jamaican players.

"I'm sure, now.....I can say at least three, four players are on their radar to bring them over. Might not be our team, but in the same league or next-door neighbours United Arab Emirates, Qatar, Saudi Arabia," Lowe said. "The market is open for Jamaicans to come in, because we've come here and done well; and I'm just glad that I was able to play a part in that to help my fellow countrymen."

Williams was on target again for Al Ittihad as they came from a 1-0 deficit to defeat Al Mokawloon 4-2 in Monday's league fixture to move into second place in the league despite playing two games more than leaders Zamalek and six games more than defending champions Al Ahly.