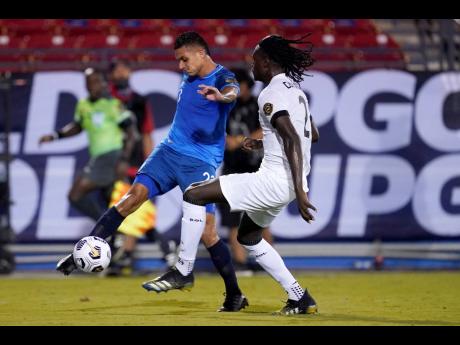 Guatemala midfielder Jorge Aparicio (left) takes a shot at goal as Trinidad and Tobago defender Aubrey David defends in the first half of a CONCACAF Gold Cup Group A match on Sunday.

FRISCO, Texas (CMC): Trinidad and Tobago's quest to end their Concacaf Gold Cup campaign on a high note ended in disappointment when they were held to a 1-1 draw by Guatemala here Sunday night.

Reon Moore's early first half-half strike had lifted the hopes of the Trinidadians but they conceded deep in the second half through a clinical finish from Gerardo Gordillo, to settle for a share of the points at Toyota Stadium.

In their previous two games, Trinidad and Tobago drew nil-all in their opener against Mexico before going down 2-0 to El Salvador last Wednesday.

They ended third in Group A on two points, only above the Guatemalans who were at the bottom with one point.

"I was disappointed tonight because we wanted to be on the front foot," said T&T's interim head coach Angus Eve.

"We started that way. I thought we dominated the game first half but when we scored the goal, we never really pushed to get the second goal to kill off the game.

"And then in the second half, I think the fellas went into a shell and tried to keep what they had. We were trying to drive them forward but they just kept dropping back.

"That was never in the plans today and it's the first time I've been disappointed in the group."

The Caribbean unit notched their first goal of the tournament when Alvin Jones surged into the right side of the box and picked out Moore on the left, the 24-year-old opting for a left-footed finish to beat goalkeeper Kenderson Navarro at the far post.

Navarro saved from Andre Fortune in the 33rd minute as T&T went to the break in control of the contest.

Guatemala gained a foothold in the game following the break, however, increasing their possession and pushing T&T further back into their own half.

Oscar Santis went close in the 59th minute when his shot sailed over the crossbar while Rudy Barrientos, a half-time substitute, forced a low diving save out of goalkeeper Marvin Phillip in the 60th minute.

When Jorge Aparicio drove wide of the uprights in the 71st minute with the T&T defence in chaos, Guatemala were scenting their leveller, and there was no surprise when it arrived minutes later.

Marvin Ceballos put a perfect corner into the box and Gordillo was faster to the ball than Noah Powder, powering his header past Phillip. Luis Martinez then nearly won it in the 84th but his goal-bound shot was brilliantly saved by Phillip.

In Group B, Haiti beat fellow French Caribbean side Martinique 2-1 to collect their first points of the tournament.

Carnejy Antoine put Haiti ahead in the third minute before Kevin Fortune levelled in the 53rd, and Ricardo Ade found the winner eight minutes later.