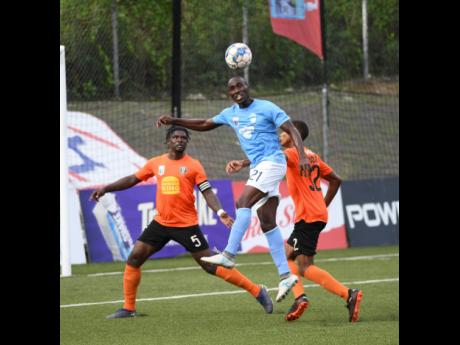 Waterhouse’s Damion Binns (centre) heads the ball while under pressure from Tivoli’s Barrington Pryce (left) and Odean Pennycooke. The action is from yesterday’s Jamaica Premier League match at the UWI/Captain Horace Burrell Centre of Excellence. 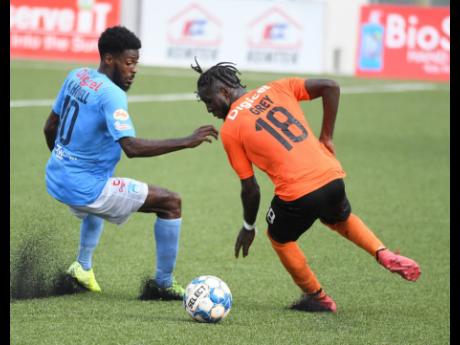 Tivoli Gardens head coach, Phillip Williams, credited the grit of his goalkeeper Nicholas Clarke as they drew 1-1 with Waterhouse in their Jamaica Premier League fixture yesterday at the Captain Horace Burrell Centre of Excellence at the University of the West Indies.

Andre Fletcher gave Waterhouse the lead in the 62nd minute, a lead that would only last three minutes as Devroy Gray equalised with a guided header that went into the bottom corner. Entering the game, Tivoli were faced with squad problems resulting from their starting goalkeeper Davin Watkins being suspended. In fact, Clarke was the only goalkeeper listed in the 18-man squad for the game, and Williams said that he was relieved that he was able to perform despite an injury in the latter stages of the game.

"We came here a goalkeeper short and that was a worry before the game started and something that we were looking at right throughout the game," Williams said. "Thank God we finished the game not having to use the other options that we had. The goalkeeper really toughed it out for the team and he did well."

Following their 3-1 defeat by defending champions Portmore United last week, Williams opted to make changes, dropping experienced players such as Jermaine Johnson and giving some of his young players the opportunity to prove themselves. Williams said that it was an opportunity that they deserved after the work they put in through the week.

"These youngsters have been working their socks off in training and have been crying out for their chances and we just have to take the bold move and use them," Williams said.

Tivoli currently are in eighth place with five points but Williams said that they are not deterred by their current position, believing that they have what it takes to quickly improve their position.

"We have played four games now against some quality teams and have five points. It is in the expected range that we had projected and we are not worried. We just need to plan for the other teams and execute on the days whenever we have matches," Williams said.

Tivoli Gardens will next play Cavalier on Sunday.