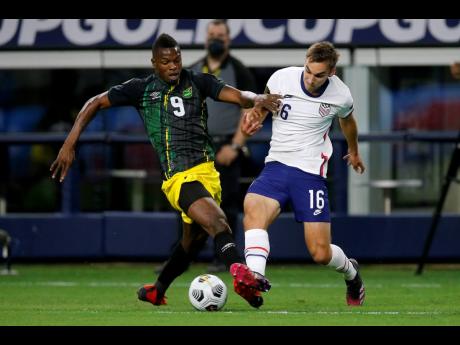 Jamaica forward Cory Burke (9) and United States defender James Sands (16) compete for control of the ball in the first half of their Gold Cup quarter-final match on Sunday in Arlington, Texas. The United States won 1-0. 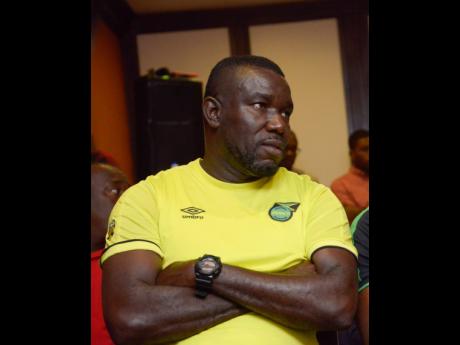 National senior men's head coach Theodore Whitmore has blamed poor finishing for Jamaica's 1-0 defeat to the United States (US) in their 2021 Gold Cup quarterfinal in Arlington, Texas, on Sunday night.

Matthew Hoppe scored the lone goal in the 83rd minute for the Americans, denying the Reggae Boyz their fourth straight trip to the semi-finals. The wait for a continental title continues as Jamaica have now been eliminated by the US in three straight tournaments (2017, 2019, 2021).

The Reggae Boyz had the chances in the first half, but they could not capitalise on those they created.

"It was a tough game. We expected it to be tough. There are certain aspects of the game that I'm not comfortable with especially in front of goal. I think we need to be more composed in front of goal," Whitmore said. "The game is about taking chances, and I think the US did that."

Jamaica had six shots, five of them on target in the opening 45 minutes compared to the US's five shots with only one managing to test goalkeeper Andre Blake. Fulham striker Bobby Reid, who returned to the starting line-up after missing the last two games because of medical reasons, had an excellent chance in the 40th minute when he was put through by Kemar Lawrence, but his shot was tame and easily collected by US goalkeeper Matt Turner.

Jamaica lost the possession battle to the US (66 per cent to 34), and while both teams had the same number of shots on target (seven), Jamaica could only manage two in the second half compared to the home team's six.

Compared to their previous deep-tournament runs, which included back-to-back finals in 2015 and 2017 and making it to the semi-finals in 2019, Whitmore said that falling at the quarterfinal stage this year is a disappointment. However, he says that they have no time to dwell on the loss as the focus shifts towards the World Cup qualifiers, which begin in September.

"We have to brush ourselves off. We have the World Cup qualifiers coming up. I'm pleased with what the guys have done in the tournament. We still have some work to do, but we just have to pick up the pieces and look forward to the qualifiers," Whitmore said.

Despite their exit, national striker Junior Flemmings says that there are positives to take from the tournament. He pointed to the integration of players such as English-based Liam Moore and Andre Gray as well as the improvement in team chemistry from the three weeks together.

"This is our first time playing together, with a lot of guys coming into the squad. It's just for us to gel and keep this cohesiveness going into the World Cup qualifiers," Flemmings said.