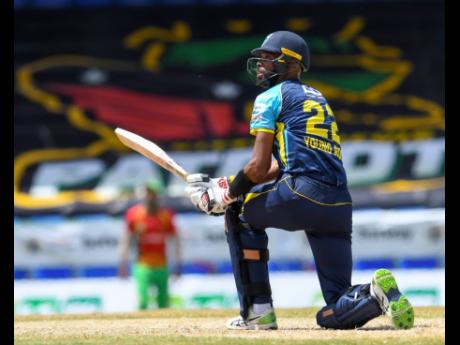 Roston Chase's third Twenty20 fifty handed St Lucia Kings their second win of the Caribbean Premier League and lifted them off the floor of the standings as they convincingly beat Guyana Amazon Warriors by 51 runs here Thursday.

Barbadian Chase, better known for his powers in the longest format, slammed a career-best 85 off 50 deliveries, an innings that powered Kings to 149 for seven off their 20 overs.

In reply, Amazon Warriors were mowed down for 98 with 19 balls remaining despite captain Nicholas Pooran's 41 off 26 deliveries and Odean Smith's unbeaten 31 off 18 balls.

Left-arm spinner Jeavor Royal ran through the innings with a spell of three for 19 while seamer Kesrick Williams (2-7) and Obed McCoy (2-19) grabbed two apiece as Amazon Warriors lost their last six wickets for 35 runs in quick time.

The victory was the second for the Kings in four matches, and it carried them to four points, four adrift of leaders St Kitts and Nevis Patriots, who are still unbeaten.

"It feels good, obviously, to get a win now," said Man-of-the-Match Chase.

Sent in, Kings were floundering at seven for two in the second over before Chase engineered the revival. First, he put on 74 for the third wicket with Mark Deyal (20) before adding a further 51 for the fourth wicket with Tim David (15).

All told, the 29-year-old thumped half a dozen fours and seven sixes before falling to a stunning catch by Gudakesh Motie at deep point off fast bowler Romario Shepherd, who claimed three for 21.

McCoy then struck twice as Amazon Warriors slumped to 15 for four before recovering courtesy of a 48-run fifth-wicket stand between Pooran and Shimron Hetmyer (nine).

Pooran, short of runs in the tournament, blasted two fours and five sixes, but Hetmyer was subdued in contrast, spending 21 balls without a boundary before perishing in the 12th over.

Smith entered to belt a four and four sixes, but Pooran's demise in the 14th over ended Amazon Warriors' faint hopes.

"I'm happy we restricted them to 149, but I'm not happy with that bowling performance. We kept giving them free hits. It's unacceptable and I'm unhappy," said a disappointed Pooran.