Jamaican Williams looking to carry on after third ODI experience 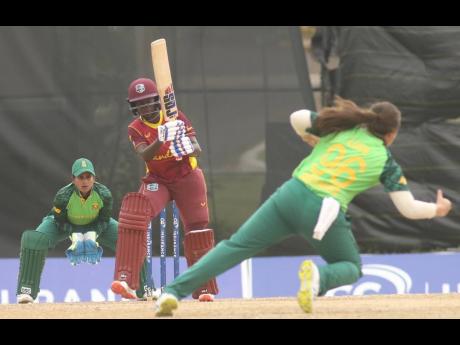 Rashada Williams (centre) of the West Indies Women's team in action against South Africa in the third One Day International at the Coolidge Ground in Antigua yesterday.

Jamaican opening batter Rashada Williams got her third taste of senior West Indies action albeit on a losing cause, as the regional women went down by eight wickets to their South African counterparts in the third One Day International at the Coolidge Ground in Antigua yesterday.

The right-handed Williams looked more than competent at the top of the order, hitting a resilient 37 from 79 balls with three fours before she was caught at deep cover.

Williams shared in a crucial 77-run third-wicket stand with Deandra Dottin in the West Indies total of 157 all out in 48.4 overs. Dottin was the mainstay of the West Indies innings, hitting a fighting 71 from 123 balls with six fours and one six.

No other West Indian batter got into double figures as pacer Shabnim Ismail bagged three for 31 from her 10 overs while there were two wickets for Ayabonga Khaka and Sune Luus.

The South Africans made light work of the West Indies total getting to 158 for two in 36.4 overs, as Lizelle Lee continued her rich form with 78 not out from 120 balls with nine fours and Laura Woolvaardt scoring 53 runs from 68 balls with six fours.

Left-arm rookie spinner Qiana Joseph picked up the two wickets to fall for 24 runs in 7.4 overs. With yesterday's win, South Africa clinched the five-match series with an unassailable 3-0 lead.

In the meantime, Williams who made her debut against Pakistan in July, says she was glad to get another opportunity to represent the West Indies in international cricket.

"I was a bit nervous at first, but when I got in, I was pretty good from there. My role was basically to watch what was happening with the wicket because some balls were popping and some were keeping low. I aimed to keep the things going and give Deandra the strike so she could do her thing," said Williams.

The score of 37 represents a second-best ODI score for Williams, who has a best of 70 which she scored for West Indies 'A' against Pakistan 'A' on July 9.

The wicketkeeper/batter was pleased with her effort but is keen to go on and get bigger scores once given the opportunity again.

"I think my score was good but with my talent, I know I should have carried on. It is for me to continue putting in the work in training and next time when I get the chance, I just carry on when I get the starts," added Williams.