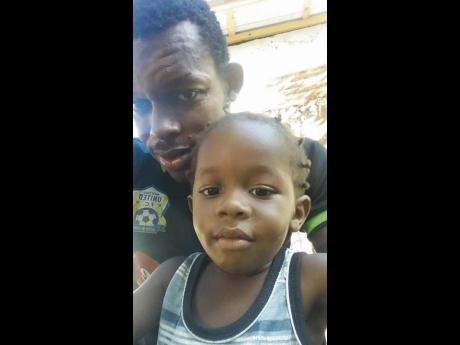 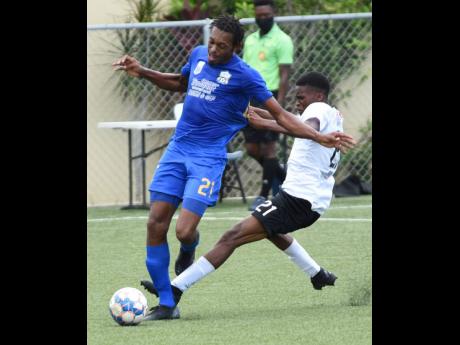 Kemar Seivwright (left) of Molynes United is strongly tackled by Christopher Ainsworth of Cavalier during a Jamaica Premier League football match at the UWI-JFF Captain Horace Burrell Centre of Excellence on Saturday, August 14.
1
2

Molynes United's defender Kemar Seivwright and his son, Rojeif, have been given a huge lifeline after they received a big reduction in the overall cost of treatment for the young Seivwright, who was diagnosed with neuroblastoma, a cancer which develops in the nervous system of babies and very young children.

Originally, the family was asked to find US$2.7 million (approx J$405 million) for young Rojeif to be treated overseas at the Memorial Sloan Kettering Cancer Centre in Manhattan, New York.

However, in a sudden change of heart, the American institution decided to reduce the overall cost to US$1.2 million (approx J$180m).

They are also working out an arrangement to have the money paid in parts, he disclosed.

Despite this encouraging news, Seivwright revealed they have only managed to raise US$28,000 or approx J$4.2 million and are still a far way off their required target.

Nevertheless, he is keeping his fingers crossed that they reach the objective as soon as possible, as recent developments regarding the child's condition have been troubling.

We have raised J$4 million

"It is heart-warming to know they have brushed off a big load off the cost. We have raised J$4 million so we still have a very far away to go," he pointed out.

"We are now trying to work out a deal where we don't have to pay all the money up front. We can pay it in sections. But first we have to get them to accept him and start the treatment," he said.

In the last few weeks, a few lumps have surfaced on the head of the three-year-old, and although he appears to be in good physical health, Kemar's fatherly instincts tell him he needs to get Rojeif into treatment as soon as possible.

"The doctors say there is no more treatment that they can give him in Jamaica. But after getting his chemotherapy I saw two more lumps pop up on his head.

"One is spreading wider, while the other has remained the same size.

"This is a real concern because if he is finished with chemotherapy and this is still happening, something is restarting in his body.

"He hasn't shown any signs of pain or discomfort. He is active and eating. The concern is the mass in his head and the lumps that have popped up. This has pushed me to go even harder to get him sorted out. The doctors here might be able to slow down the process until I am able to get through. But we need to get him there as soon as possible," he insisted.

He, however, contends that time is the master and the family is hoping and praying adequate support will come in time to help Rojeif undergo his treatment.