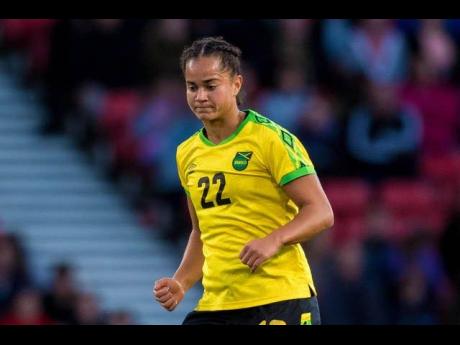 Fresh off her first start and hat-trick for Rangers, national striker Kayla McCoy says that she has put her previous injury problems behind her and is ready to continue her strong play in the Scottish Women's Premier League (SWPL).

McCoy, who scored her first goal for Rangers on October 6, followed up with a three-goal performance as they thrashed Aberdeen 8-0 on Sunday in their SWPL match at the Hummel Training Centre. Lizzie Arnot scored a brace while Jane Ross, Kirsten Reilly and Chelsea Cornet added strikes, respectively, as Rangers extended their winning start to the season with their sixth straight win.

McCoy's performance in her first start since signing with the club in the summer also represents a return to form after suffering an anterior cruciate ligament (ACL) injury in August 2020 that kept her out of action for 10 months. Speaking with Rangers TV, McCoy said that it felt good to put in such a display and to get her confidence back day by day

Her performance also garnered praise from her head coach Malky Thomson, who was pleased with not only her display but the work she has put in to return to match fitness

"She has worked tirelessly to get herself to a fitness level where she feels free and I think you could see that she really contributed well to the team," Thomson said. McCoy says that being consistent will help her increase her confidence level further.

"I think for me it's (about ) just getting over that mental barrier. Now I'm back I think getting goals is the best way to do that. For me it's just to kind of build confidence and get back to being comfortable on the pitch," McCoy said.

Rangers, who currently lead the table with 18 points, will face defending champions Glasgow City on Sunday. Glasgow City are in second place with 16 points.