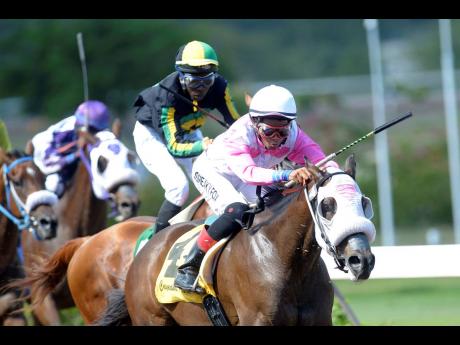 Top claiming apprentice, Raddesh Roman, is scheduled to make his much anticipated return to the saddle on Saturday at Caymanas Park after almost nine months out of the sport with a shoulder injury.

He has been out of action since December 19, after falling from UNION FOUR during exercise after passing the three-furlong post.

Roman has had surgery repair twice on the same shoulder in the past six months, and said the injury has fully healed and he is ready to resume riding on Saturday.

"I am feeling pretty good to know that I will be making my return to race-day riding at Caymanas Park," said Roman.

"I have been working horses for almost two weeks now and things have gone well, so I am just looking forward to doing great things on Saturday and beyond," he said.

"I am still not 100 per cent fit, but the shoulder is properly healed so the more I ride, the fitter I will get," Roman said.

Roman, 23, has secured two rides on Saturday's 10-race card, DILIGENT in the first race and CAROL STRIKE in the sixth event. Roman, who began riding at Caymanas in 2018, has ridden 61 winners so far.

He underscored that the past 10 months has been very difficult because he was not able to earn a living from the sport.

Roman also stated that everyone has been showing a lot of love and appreciation since his return to exercise workouts a few weeks ago, which makes him determined to do well.

"The trainers and everybody have welcomed me back and a lot of people at the track are happy to see me because they have been showing me a lot of love," said Roman.

"I am not nervous about riding on Saturday because I have been doing this for a while and this is my job, and I am confident and just looking forward to doing my best."