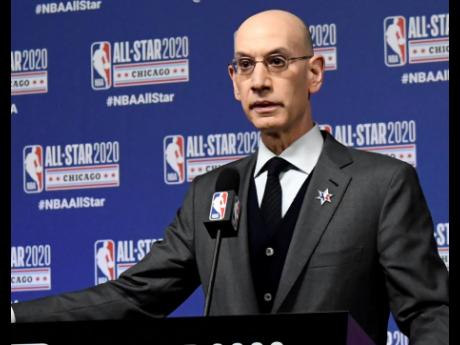 Adam Silver, the basketball fan, would prefer to see Kyrie Irving on the court again with the Brooklyn Nets as soon as possible.

Adam Silver, the NBA commissioner, would prefer to see Irving vaccinated.Silver said yesterday he hopes Irving -- one of the few players in the league who has not yet chosen to be vaccinated -- changes his mind before long and clears a path to get back on the floor with the Nets.

"I would like to see our players vaccinated, because I think it's a public service of sorts, particularly to young people who might not see the value of getting vaccinated," Silver said on the eve of the league's 75th anniversary season, the third to be impacted by the coronavirus pandemic,

Irving cannot play for the Nets in large part because of rules unique to New York and San Francisco requiring vaccinations as a prerequisite for working. The Nets said last week that Irving would not be involved in team activities "until he is eligible to be a full participant."

And at this time, that means vaccinated. Silver would not disclose if he has spoken with Irving directly, but made his stance clear.

"There's nothing fair about this virus," Silver said. "It's indiscriminate in terms of who it impacts. And I think it's perfectly appropriate that New York and other cities have passed laws that require people who both work and visit arenas to be vaccinated. That seems to be a responsible public-health decision."

About 96 per cent of NBA players have been vaccinated, Silver said. That means that about 20, or less than one per team on average, are not. Anyone working games in proximity to players this season, from referees to stat-crew employees, must be vaccinated by league mandate.

"I hope that Kyrie, despite how strongly he feels about the vaccination, ultimately decides to get vaccinated because I'd love to see him play basketball this season," Silver said. The new NBA season begins tomorrow.