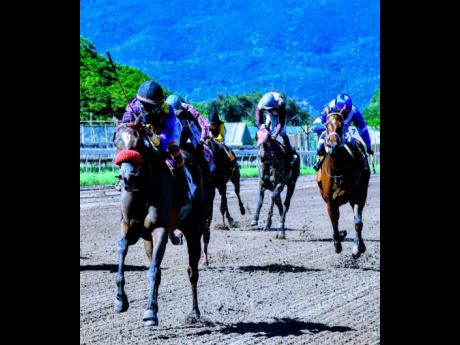 AWESOME TREASURE, with Raddesh Ramon aboard, wins the fifth race at Caymanas Park on Saturday, October 10, 2020.

AWESOME TREASURE is far from being a five-straight specialist but takes a sneaky drop in class to contest the trip in Monday's non-restricted overnight allowance.

Having scored a 14-1 upset at five furlongs straight in May, clocking 58.2 to outfinish TASK FORCE and WEEKEND JAZZ, AWESOME TREASURE is no pushover at the distance, especially sharing topweight with suspect rivals.

Coming in at 126lb, United States-bred AWESOME TREASURE is drawn at stall eight with local-bred LOOSE BALL to her right, sitting at level weight. One stall further right is fellow importee, SPARKLE DIAMOND, returning off a near six-month lay-up with 123lb.

EXCESSIVE FORCE, who AWESOME TREASURE had wired at a mile in June, is drawn mid-course the 12-horse field, stall six, running with 117lb due to Shane Richardson's six-pound claim.

Returning quickly after a fourth-place finish behind LURE OF LUCY at a mile last Tuesday, EXCESSIVE FORCE is notorious for giving away lengths at the start, an unaffordable luxury at five furlongs straight.

Gary Subratie is a sly customer whose runners can never be judged on their lax attitude at exercise. Instead, pay keen attention to what they do in innocent-looking outings such as AWESOME TREASURE's last run at five furlongs straight, breaking from post-position one in a cracker-of-a-race won by in-form ROJORN DI PILOT beating lightning-fast PATRIARCH in the September 11 Reggae Trophy.

Ridden by injured Dane Dawkins, who has been replaced by no-nonsense Robert Halledeen for Monday's run, AWESOME TREASURE raced prominently for the entire distance, stuck like glue to none other than KING ARTHUR, who was similarly terribly drawn at stall two with 130lb.

Considering her stablemate, third-place DUKE, was drawn at stall seven with Halledeen aboard and highly fancied at odds of 4-1, there is no second-guessing the barn's sentiments with AWESOME TREASURE going off at 27-1 that afternoon.

Down a level and better drawn, with no PATRIARCH, ROJORN DI PILOT, DUKE, LABAN or speedy SALVATION around, AWESOME TREASURE has the class to track naturally quick runners such as off-the-break CAPTUREMYSHIP and FORMAL GLADIATOR, before making a late charge to outfinish the slower closers, EXCESSIVE FORCE and LOOSE BALL.