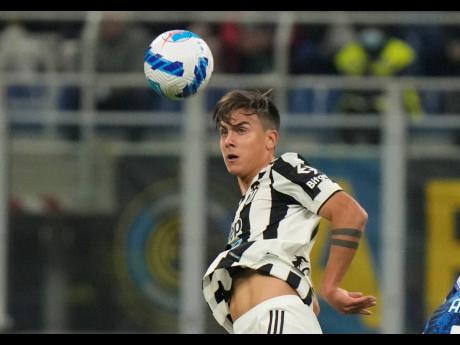 Paulo Dybala returned to rescue Juventus as they snatched a 1-1 draw at Inter Milan in the Derby d'Italia yesterday.

Dybala converted a penalty a minute from time to cancel out Edin Dzeko's first-half opener for Inter.

Inter remained third, seven points behind Napoli and AC Milan. Napoli earlier saw its perfect start to the season end with a 0-0 draw at Roma. It is above Milan on goal difference alone after the Rossoneri beat Bologna 4-2 on Saturday. Head to head is the first tiebreaker in Italy if teams are level at the end of the season.

"It was the only way we were going to concede a goal," Inter coach Simone Inzaghi said. "We're disappointed because we controlled the match from the start without conceding anything to Juventus.

"It's two points that we've thrown away."

Juventus are three points behind Inter.

"We always play to win, but today we played against a great team and the way the game was going, we got an important point," Dybala said. "Lately, I was forced to sit out with an injury, so I'm very happy with this goal."

After a rocky start to the season, Juventus were unbeaten in their previous eight matches heading into the eagerly awaited match and had won their past four games 1-0. Defending champions Inter had lost their first league match of the season last weekend, at Lazio.

The Nerazzurri took the lead in the 17th minute. Hakan Calhanoglu unleashed a screamer from distance that bounced off the right post and Dzeko fired home the rebound.