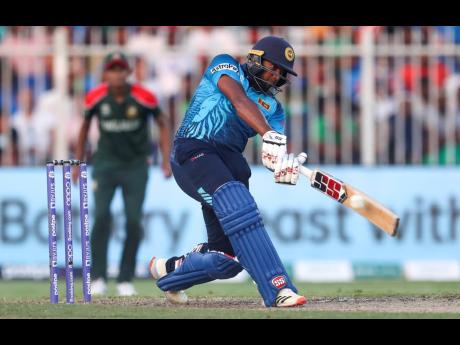 Sri Lanka sent a stern warning to their Group One rivals, including West Indies, with a dominant five-wicket victory over fellow qualifiers Bangladesh on the second day of the Twenty20 World Cup here yesterday.

Asked to chase 172 at Sharjah Cricket Stadium, Sri Lanka stormed to their target with more than an over to spare, with left-hander Charith Asalanka stroking a career-best unbeaten 80.

The victory left Sri Lanka as one of three teams on two points, after England and Australia also won their opening games on Saturday.

West Indies suffered the ignominy of being bowled out for 55 against England, their lowest ever Twenty20 World Cup total and second lowest in T20 Internationals, en route to a six-wicket loss in Dubai.

They are bottom of the six-nation group with the worst net run rate of the winless sides.

Both Sri Lanka and Bangladesh were forced to go through the qualifiers in order to reach the group stage, with the Sri Lankans topping Group A and the Bangladeshis finishing second in Group B behind Scotland.

Sent in, Bangladesh got half-centuries from opener Mohammad Naim (62) and veteran Mushfiqur Rahim (57) as they marched to 171 for four off their 20 overs.

Naim, a 22-year-old left-hander, struck half-dozen fours off 52 deliveries, putting on 40 for the first wicket with Liton Das (16) and a further 73 for the third with Mushfiqur, who counted five fours and two sixes in a 37-ball cameo.

In reply, Sri Lanka lost Kusal Perera cheaply for one to the fourth ball of the innings but Asalanka belted five fours and five sixes off 49 balls, to anchor the run chase.

Crucially, he added 69 for the second wicket with opener Pathum Nissanka (24) before forging an 86-run, fifth-wicket stand with Bhanuka Rajapaksa (53) to seal victory.

Rajapaksa, a 30-year-old left-hander who made his debut two years ago, produced a cavalier knock with three fours and three sixes off just 31 deliveries.