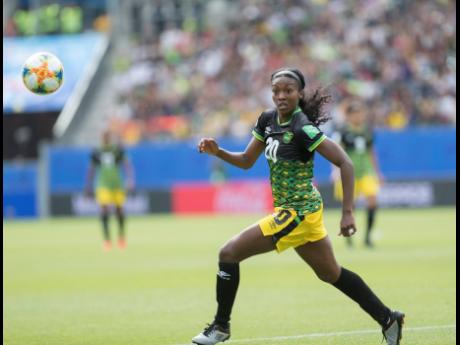 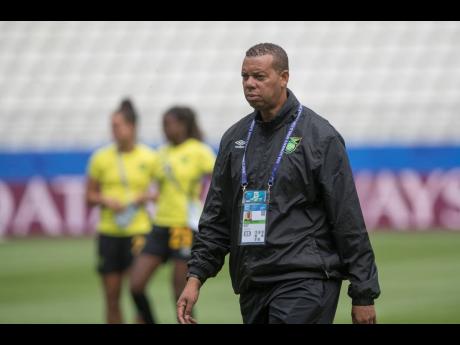 Jamaica's Reggae Girlz played 11 against 10 for more than 80 minutes but failed to grab a winner against gritty Costa Rica in yesterday's friendly international at the DRV PNK Stadium in Fort Lauderdale, Florida.

The Reggae Girlz dominated the match throughout. They had 66 per cent possession, had 19 shots (eight on target) and nine corners to nil but the game still ended 0-0. Head coach Hubert Busby Jr spoke about the 'many positives' after the game. "I was pleased with the performance," he said. "We remained loyal to the principles of how we want to play, playing through the lines and dominating technically and we created enough chances to win the game."

Busby said they will now have to work on how to break down deep sitting defences.

"We also have to deal with situations like that, when teams sit very deep and don't allow us to play and do a little bit of time wasting to ensure they get a result. But I am proud of how they represented today. It was a fine display."

Jamaica was given the numerical advantage six minutes into the game when senior Costa Rican midfielder Katherine Alvarado was shown a red card for serious foul play.

After Alvarado's dismissal, the Jamaicans tried to press home their advantage, and striker Khadija Shaw had a shot from outside the box that was blocked.

Satara Murray then came close with a header a couple minutes later.

As the Reggae Girlz increased their dominance, Paige Bailey-Gayle (twice), and Jade Bailey forced crucial saves from Costa Rica goalkeeper Daniela Solera Vega. Shirley Cruz had Costa Rica's best chance of the half but she fired over from a free kick.

Jamaica then responded with efforts from Drew Spence, and Cheyna Matthews, the latter having an effort saved from very close range in the 39th minute.

In the last five minutes of the half, the Reggae Girlz had Costa Rica on the ropes but could not find the breakthrough.

Immediately after the break, Matthews' header to the top right corner was brilliantly saved by Vega, while teammates Atlanta Primus, Shaw, and Spence all threatened to break the deadlock. Shaw also came close with a header in the 71st minute.

The Costa Ricans rarely troubled the Jamaica defence and had no shot on target. Gabriela Guillen had a header that went just over the bar in the last minute of the game, while Lixy Rodriguez's shot from outside the box just missed the upright in added time.

The Reggae Girlz are preparing for their Concacaf first-round FIFA Women's World Cup qualifiers, scheduled to begin in February. They have been placed in Group C with Bermuda, Grenada, Dominica Republic, and Cayman Islands.