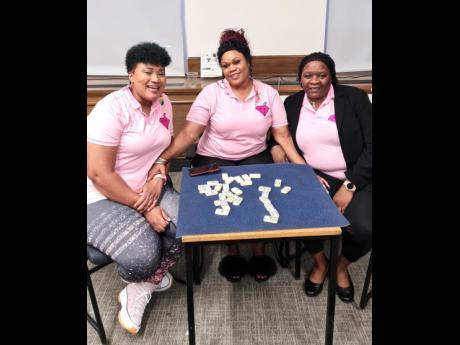 A ladies domino team is set to make its entrance into the The Anglo Caribbean Domino League when it gets the approval to resume competition after COVID-19 restrictions are lifted, and the women behind the formation of the 'Lady Diamond' team are excited for this to happen.

Alicia Grizzle, aka 'Queen B', is the captain of the first ladies domino team which was formed after a surprise win in a friendly game at the Brixton Domino Social Club, home of the Immortals, the current league champions.

Alicia said: "My friend Nadine Lovelace and I were playing a friendly men versus women game at the club one night in 2019 and we beat the men at their game so we thought, why not start a ladies domino team as we are always supporting the men's team, but we never took part ourselves.

"This gave us a boost and we started talking to ladies from other clubs and in a short time we had 35 members who signed up. We then began organising friendly games with other clubs and the excitement grew as we had tee-shirts made for the various teams, but then the pandemic came in early 2020 and the domino league activities were suspended."

Some of the ladies got together last week at the Brixton Domino Social Club's Black History Month concert and tournament at the Lambeth Town Hall and they were optimistic that they will be included in the League when it gets going.

Nadine who is the chair of the Lady Diamond team said: "We have 35 members from approximately five clubs so far and we hope to get more teams signed up from around the UK so that when the League resumes, there will be ladies teams included playing against each other for their own trophy."

Christene Saddler, in charge of the governance of the ladies team, said there are some very brilliant players who never knew how good they were until they got the chance to play against the men.

She said: "The women members of the clubs are normally associated with being the secretaries or treasurers and even preparing the food for the team but are never really involved as players, so by launching the Lady Diamond team this will even encourage more women to become members of domino clubs. The only obstacle we have now is to get sponsors as we have purchased all our gear from our own fundraising efforts."

The aim of the team now is to get started in the League and then take it internationally by playing other ladies team in the US, Canada and the Caribbean.