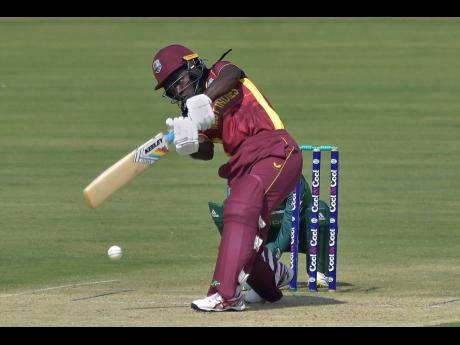 Deandra Dottin of the West Indies women’s cricket team plays a shot during the first One-Day International cricket match against Pakistan at the National Stadium in Karachi, Pakistan, yesterday.

Sent in at the National Stadium, West Indies piled up 253 for eight off their 50 overs with the 30-year-old Dottin carving out a splendid 132 off 146 deliveries, with 18 fours and a couple of sixes.

Fellow Barbadian all-rounder Hayley Matthews chipped in with a breezy 57 and then returned to take three for 31 with her off-spin as Pakistan Women were held to 208 for nine in reply.

Aliya Riaz, batting at number six, top-scored with 46, while Iram Javed produced a 34-ball cameo 40, and Muneeba Ali a busy 28.

"To be honest, when I got to the half-century it was just to start fresh again and just bat on to get a higher total on the board for the team," Dottin said afterwards.

Dottin handed West Indies a cavalier start, dominating a 44-run stand with Rashada Williams who made a patient 15 from 40 deliveries with three fours, before being bowled in the 12th over by left-arm spinner Anam Amin who claimed five for 35.

Kyshona Knight lasted two balls before retiring hurt in the next over without scoring but captain Stafanie Taylor (6) joined Dottin to extend the second-wicket partnership to 28.

Taylor, who missed West Indies' last series against South Africa, faced 11 deliveries before falling to a catch at the wicket off another left-arm spinner Nashra Sandhu in the 18th over, paving the way for an entertaining 119-run, third-wicket stand between Dottin and Matthews.

The right-handed Dottin reached her half-century off 55 balls at the start of the 19th over from seamer Aliya Riaz and then produced a measured effort to reach triple figures off 124 deliveries in the 40th over with a couple off Nashra Sandhu.

Matthews, who hit an unbeaten hundred against Pakistan Women in the Caribbean earlier this year, struck eight fours off 67 balls before perishing in the 42nd over, becoming Anam Amin's second wicket.

Dottin added a further 44 for the fourth with Shemaine Campbelle (23) before finally departing in the 47th over, lbw to Anam Amin, triggering a slide at the death where four wickets tumbled for 18 runs.

New ball seamer Shakera Selman (2-35) then struck twice to reduce Pakistan Women to 51 for three in the 13th over but Iram Javed counter-attacked in a 57-run fourth-wicket stand with Kainat Imtiaz who made 24.

Iram Javed belted half-dozen fours in a sparkling knock while Kainat was without a boundary in 60 balls but Matthews accounted for both, forcing Pakistan Women to rebuild through Aliya Riaz and captain Sidra Nawaz (23) in a 43-run, sixth-wicket partnership.

By the time Sidra Nawaz fell in the 41st, the required run rate had risen to 10 runs per over and the hosts found difficulty in coping.