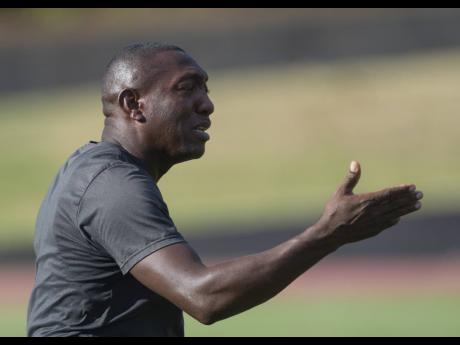 Calabar High coach, David Laylor, says although he is eyeing three points against Bridgeport High in their Group A ISSA Manning Cup game this afternoon at the Stadium East, his main focus is correcting the errors they made in the opening game last Friday.

Calabar's opening match performance against defending champions Jamaica College, a 0-0 draw, has earned them a few admirers and based on that initial performance many believe the Red Hills Road-based school will be among the main contenders for the title this season. Today's match kicks off at noon.

Laylor believes that once they continue to eradicate mistakes from the previous game, they will achieve the desired results.

"The reality for me, looking at how the team played, is to try to make the corrections we need.

"It is not what people think. We could have done better (against JC) but it was our first match and sometimes you have first match nervousness that can cause players to do different things," he said.

Charlie Smith and St George's College lead the group with three points after one game. Jamaica College and Calabar are next on one point.

Although Bridgeport will be playing their first match of the competition, Laylor believes it would be foolish to underestimate them.

Nevertheless, he said his team is high on confidence and are expecting three points.

"I do not know much about Bridgeport but I know that we cannot afford to take any team lightly. Every game we have to play like a final and play very serious and committed to the system

"So how well we play our system will allow us to reap the result one way or the other. But we have a good team energy at this time and the team is really confident.

"They want to win, and it is really pleasing for me as a coach to have a group of players who really desire to win," he added.

In the other game at Stadium East, Charlie Smith play Kingston High at 3 p.m. while in the lone game at the Ashenheim Stadium, Jamaica College take on Kingston Technical, also at 3 p.m.