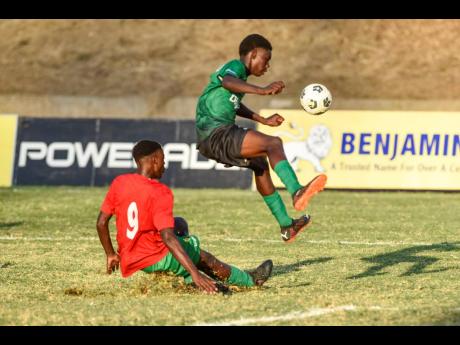 After two frustrating defeats to start their 2021 ISSA/Manning Cup campaign, Bridgeport High head coach Fabian Taylor finally got the performance and the result to mark his debut campaign at the schoolboy level.

Bridgeport edged Charlie Smith 1-0 yesterday in their Group A game at the Spanish Town Prison Oval, thanks to a 68th-minute strike from Deandre Young, their first goal of the campaign which marked their first win of the season, after a difficult start.

Taylor said that the result was a testament to the work done by his young squad and it sparked roars of joy and relief from the players after the final whistle.

Taylor credited the result to a workmanlike performance from the players and says that while there are still growing pains, he is seeing signs of their growth.

"We spoke earlier about emptying our tanks on the field and the guys did that," Taylor said.

"These youngsters take a lot of time to adapt to how we want them to play but they are showing that they are very resilient and are willing to learn."

However, Charlie Smith head coach Eugene Williams could not hide his frustration after his team's second straight defeat which he blamed on a lack of discipline from his players.

"That is the main problem. Attitude and discipline. It is a big opportunity lost. The last two games were big opportunities," Williams said.

Charlie Smith remain on six points but with games running out in a competitive group, Williams says that there is little margin for error.

"The only thing we have to do is to win the next two games," Williams said.