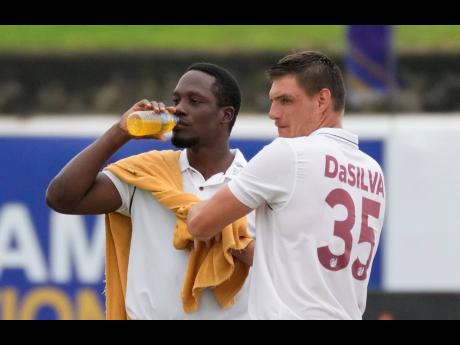 Nkrumah Bonner and Joshua Da Silva both struck half-centuries but managed only to delay the inevitable as West Indies slumped to a heavy 187-run defeat to Sri Lanka in the opening Test here yesterday.

Resuming the final day at Galle International Stadium on 52 for six, in pursuit of 348 and requiring a miracle to save the contest, West Indies found themselves without divine intervention and were dismissed for 160 in their second innings, nearly an hour after lunch.

Bonner, beginning the morning on 18, finished unbeaten on 68 while wicketkeeper Joshua Da Silva converted his overnight 15 into 54, defiant efforts which frustrated Sri Lanka for most of the first session.

However, once Da Silva perished in the fifth over before lunch, Sri Lanka got the opening they desperately needed and finished off the tail after the interval.

Left-arm spinner Lasith Embuldeniya added another three wickets to his tally to finish with five for 46 while Ramesh Mendis ended with four for 64 after going wicket-less on the final day.

The defeat extended West Indies' wretched run of never having won a Test on Sri Lankan soil, and put them in danger of another series defeat in the south Asian nation.

"I thought today, Joshua and Bonner, the fight they showed - even from yesterday evening being [18 for six] - I think that was commendable for us," said a dejected West Indies captain Kraigg Brathwaite.

"I think as batsmen we just have to learn from it.

"I believe the first innings total is always important and if you don't do well there you're going to be under pressure and that's where we fell down.

"Obviously, for Sri Lanka the skipper played well in the first innings and it was important we got close to their score or even past, and obviously, we let ourselves down there."