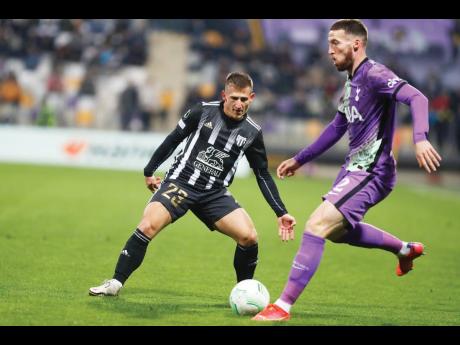 Ten-man Tottenham conceded a late goal and fell to a humbling 2-1 loss to lowly Slovenian team NS Mura in the Europa Conference League on Thursday, a result that puts the London club in danger of being eliminated from the third-tier competition.

Amadej Marosa scored for Mura four minutes into stoppage time in Maribor, finishing off a quick counter-attack with a shot that was deflected and looped into the net. It was a big blow for new Tottenham manager Antonio Conte, whose team now likely needs a win over group winners Rennes in the last round to have a chance of advancing.

"This a bad loss for us," Conte said. "The performance was poor. We know we have a lot of work ahead of us," he said. "We were poor not only technically and tactically but also mentally. It will take time to bring Tottenham back."

In the same competition, Jose Mourinho's Roma routed Zorya Luhansk 4-0 at Stadio Olimpico to stay in contention for the first place in Group C.

In the Europa League, West Ham clinched top spot in Group H with a game to spare with a 2-0 victory at Rapid Vienna. Bayer Leverkusen also sealed a place in the round of 16 after coming back from 2-1 down to beat Celtic 3-2 in Group G.

Only the eight group winners go straight into the round of 16 -- the runners-up enter play-offs with the eight teams who finish in third place in the Champions League groups.

A similar system operates for the third-place Europa League teams dropping down into the Europa Conference League.

Mura had lost their first four group games but went ahead in the 11th minute when Tomi Horvat scored into the roof of the net. Tottenham, one of the big favourites to win the first edition of the competition, then had Ryan Sessegnon sent off in the 32nd with a second yellow card.

Harry Kane equalised from a narrow angle in the 72nd but Tottenham then needlessly gave Mura the chance to counter in the final seconds.