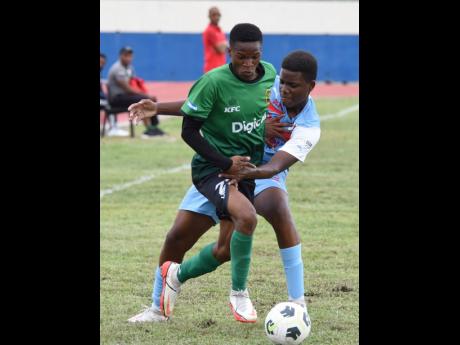 While St George's College's head coach Neville Bell didn't classify the 2021 Manning Cup season as a rebuilding year, he says that the preparation challenges took their toll on a young squad who will not advance from the first round.

St George's College were flattened 7-1 by Calabar High in yesterday's Group A game at Ashenheim Stadium which effectively ended their chances of second-round qualification with a game left to play.

Rushike Kelson had a first-half hat-trick in the second, 11th and 45 plus two minutes, while Omario Henry (57th and 87th) and Christopher Ainsworth (17th and 74th minute) each scored twice to give Calabar a slim chance of advancing. Justin Nelson got the lone goal for St George's in the 20th minute.

Bell said that even with preparation constraints for the truncated campaign, he didn't want to sell his team short of their chances to give a good account of themselves.

"At the start of the season, someone came to me and asked whether it was a rebuilding year and I said I don't want to say that because when you say that you are saying that we are not going to do anything this year. I didn't want to put the youngsters through that," Bell said. "We wanted to do well. We didn't do as well as we would have wanted obviously."

After winning their first two games, St George's have now lost three in a row, compounded by back-to-back heavy defeats by Calabar and by Jamaica College who beat them 6-0 last Friday. But Bell said the boys are still determined to finish off their campaign on a winning note with still lessons to be learned.

Calabar head coach David Laylor credited the back line as well as the changes in personnel which helped them to rebound after two straight defeats.

"My defenders, they stood up well so I must applaud them. My central midfield they were excellent. The adjustments in the middle of the pitch went well for us," Laylor said.

St George's College are now in fifth place with six points. They will finish the season against Charlie Smith High on Saturday.