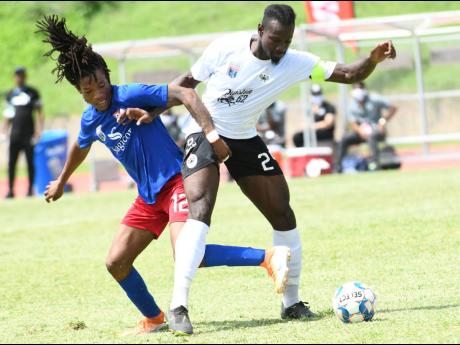 Kamoy Simpson (right), then of Cavalier, shields the ball from Dunbeholden’s Kimoni Bailey during a Jamaica Premier League game at Stadium East in Kingston on Sunday, July 11, 2021.

Former Cavalier captain Kamoy Simpson says his move to Once Deportivo in El Salvador is, hopefully, a stepping stone to bigger and better opportunities.

Simpson, 29, signed for the El Salvador Primera Division side for five months from the Jamaica Premier League champions.

"Going to Once Deportivo, the plan is to go over there and execute in the right way and help the team to win the championship," Simpson told STAR Sports.

"I will use this first opportunity to market myself and try to put myself on a higher level.

"It is a five-month contract and I want to make the most of the opportunity. I want to grab it with both hands and both feet.

"So me showing my talent there and helping them to keep as many clean sheets, will lead to a better future for me. So I will not make this opportunity past and I hope it is the start of a new journey and a new beginning."

Simpson, who played as a defender and defensive midfielder, left Cavalier briefly in 2014 but returned months later, and he capped off a successful career to their first national title since 1981.

He helped them to six cleans sheets in 13 matches and he his looking to add some authority in defence for his new team.

"I am expecting high intensity football," he said. "It is a passionate environment, but that is something I believe I can adjust to, I just have to keep focused.

"So my goal is to keep clean sheets and help the team win by even scoring a goal or two myself.

"This opportunity came for me and I believe it is a good time to take it up. This is a step toward a greater future. It will also be an opportunity for a national call-up.

"After the five months, I will be looking for at least a renewal of contract or even to move on to a better place. This is the start of a new beginning, so let's see what the future holds."