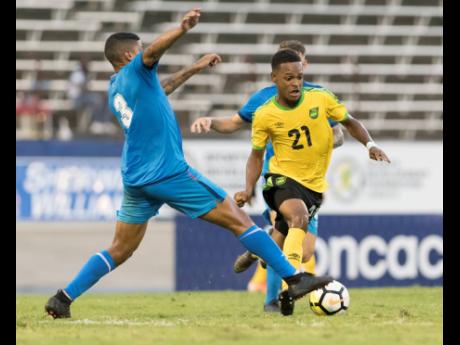 National midfielder Alex Marshall says that he is banking on his growth to seize his latest opportunity with the Reggae Boyz after a two-year absence.

Marshall, 23, was named to the latest Reggae Boyz squad that will take on hosts Peru in their international friendly on January 20. Interim head coach Paul Hall will be using the game to evaluate players that could feature in Jamaica's next three World Cup qualifiers, against Mexico, Panama, and Costa Rica.

The former Cavalier player last played for Jamaica in October 2019 during the Concacaf Nations League. Since then, he has been playing for HFX Wanderers of the Canadian Premier League (CPL). Marshall described his return as a prayer answered and hopes that, under Hall, he can display the ability which saw former head coach Theodore Whitmore give him his international debut in 2017.

"I've been praying and working for that call-up all year last year," Marshall told STAR Sports. "So, being called up to play in this friendly must be the prayer and hard work paying off. "I'm just going to be the same player that I've always been, because I think that's the reason he picked me for this game."

Marshall is coming off a 2021 campaign in which he scored two goals and registered one assist with the Wanderers. While admitting that his last campaign was not his best, he says that he has evolved during his two years in Canada, eliminating bad habits in his game.

"I know the game a bit more now and understand that it's a completely different speed outside of Jamaica," he said. "Personally, I think I'm more mature in terms of -- stuff I used to do, I try my best not to anymore."

It is that growth that Marshall hopes to play a part in a World Cup campaign that Jamaica is hoping to turn around. The Reggae Boyz are sixth with seven points and six games remaining. Despite the position, Marshall says that he can contribute to the present campaign and not just be an element for the future.

"It has always been my dream to play in those qualifying games, but I'm patiently waiting and working on my chance to do so," he said. "I think we still have a chance. That's the beautiful thing about this game, it's not over until there's not even games to catch the teams in front of you."

Marshall has made 10 appearances for Jamaica and registered two assists during that span.