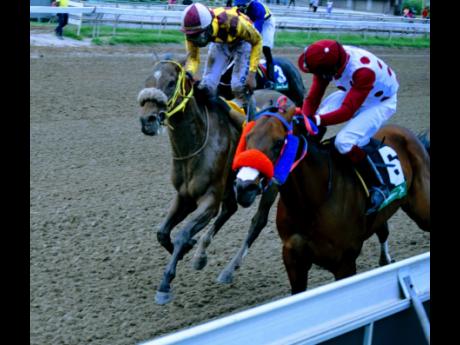 Eagle One (right), ridden by Phillip Parchment, wins The Printery Department Trophy for Three-Year-Olds and Up Overnight Allowance stakes over six and a half furlongs at Caymanas Park on Saturday.

EAGLE ONE, a winner two runs down in class last week, could strike again with the handicaps in his favour on return to open-allowance company in Saturday's St Catherine Cup at six furlongs.

A grade-one winner last June, beating stablemate KING ARTHUR and FATHER PATRICK in the seven-furlong Eros Trophy, EAGLE ONE would have been more comfortable going a little longer but is super-fit and could benefit from a collapsing pace.

Stablemates PATRIARCH and GOD OF LOVE will be up to their usual tag-team antics, speedster and stalker, respectively, but have trip and weight hurdles against them.

PATRIARCH made all at five furlongs straight, his favourite trip, to beat EAGLE ONE by a length and a half on Boxing Day. EAGLE ONE, under the circumstances, did extremely well to get as close to the course specialist with whom he shared topweight 126lb.

On the round course, especially six furlongs, PATRIARCH will be in trouble to maintain his gallop, having not won farther than five and a half furlongs in excess of three years, despite logging 15 wins from 36 starts.

Now seven years old, PATRIARCH will be hard pressed to last the distance with a cavalry charge expected in the stretch run. GOD OF LOVE has paid the price at the scale, topweight 126lb, after sticking out his neck on last, losing by a half-length to FATHER PATRICK in a graded stakes/open allowance event on Boxing Day, slapped with a 12lb penalty on the 114lb he had carried up in class.

Toting 126lb with which he had to rally when holding off late-charging ONE DON, at five-and-a-half in overnight allowance, GOD OF LOVE spots EAGLE ONE eight pounds, going a half-furlong longer.

The game plan is as clear as day, PATRIARCH on the lead with GOD OF LOVE stalking but the road to hell is paved with good intentions of which neither NUCLEAR NOON nor EAGLE ONE harbours in the ongoing war between the top barns of champion Anthony Nunes and Young Turk Jason DaCosta.

NUCLEAR NOON and EAGLE ONE will make their bids inside the final furlong where PATRIARCH and GOD OF LOVE will be most vulnerable with trip and weight against them, respectively.

After capitalising on BILLY WHIZZ' misfortune at the gate to beat REGNANT in restricted-stakes company at six furlongs, NUCLEAR NOON had to be ridden out to catch DEEP BLUE SEA and crew in a field of washed-up overnight allowance runners a week later. On Boxing Day, he made a bid at FATHER PATRICK but finished fifth at five and a half, bringing his class into question.

EAGLE ONE, however, providing his hard-pushing rider, Phillip Parchment, doesn't get overly excited to chase the first quarter, has the class and mid-race pace to tumble on them all inside the final furlong. If it comes down to a driving finish, Parchment should get EAGLE ONE home.