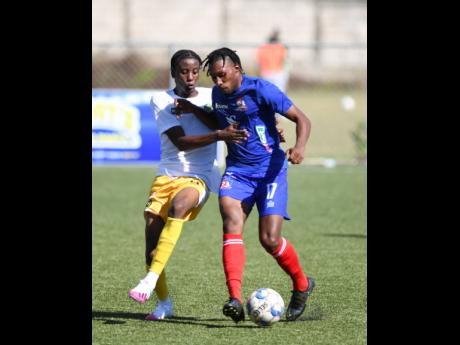 Bygrave scored twice in his club's 3-0 win over Montego Bay United on Monday, taking his tally to three for the season, putting him in a tie with Tivoli Gardens' Warner Brown, and Waterhouse's Andre Fletcher for the golden boot lead.

Bygrave's performances come during the club's best-ever start to a campaign, winning their opening two games for the first time in their four-year stay in the top flight.

Bygrave says that he enjoyed his time as a futsal competitor when he captained the Medley Mixers team in the Red Bull tournament in 2019, an experience that he attributes to refining his goal-scoring ability.

He has already equalled his 2021 goalscoring tally, scoring in back-to-back games and has set himself a target for 20 goals this campaign. But he says he has not closed the door on a return to the competition in the future.

"I would love to play in that Neymar Futsal again so that I can meet him," Bygrave said.

In the meantime, he is hoping to elevate Dunbeholden as a play-off contender, having missed out on the top six last season. The club are in second place with six points and a +4 goal difference, one less than leaders Mount Pleasant Academy. Bygrave says that turning around their previous poor starts has put the club in the best position to right the wrongs of 2021.

"The last couple of years, we were not successful in winning the first game or the second game," he said. "When we reached the third game, we probably get a point or so. But we have been working hard and that is why we have gotten those two wins. We really needed it."