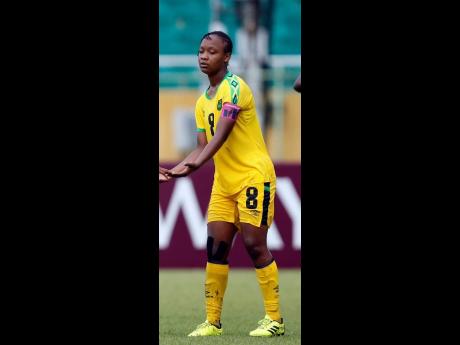 Dannique Wilson (above) scored the second goal for the young Reggae Girlz yesterday.

Jamaica needed a come-from-behind performance to book their place in the knock-out round of the Under-17 Concacaf Women's Championship.

The young Reggae Girlz defeated the Dominican Republic 3-1 in their second Group F game at the Felix Sanchez Olympic Stadium in Santo Domingo. Maria Torreira gave the home team the lead in the third minute but Jamaica responded with goals from Tiny Seaton in the 30th minute, Dannique Wilson in the 70th minute and Natoya Atkinson in the 91st minute, giving them their second win of the tournament and a place in the last 16.

Seaton said after the game that she was 'feeling great' about the team's performance.

"We put in the hard work in Jamaica and we have come here to execute," she added.

Fuelled by their 7-0 opening win over Bermuda on Sunday, Jamaica found it much tougher against the host nation, with the Dominican Republic forcing the initiative early, leading to Torreira getting on the end of a cross to fire home the country's first goal in the tournament. The hosts, who lost their opener 10-0 to Canada, were the aggressors as they looked to get their first win in their tournament debut.

However, Jamaica were persistent in their response and got the equaliser at the half-hour mark when a through pass found Seaton and she powered through the right-hand side before firing a low shot into the corner.

Despite the equaliser, the pace was back and forth at times in the first half, with Jamaica looking more vulnerable to conceding again. However, the young Reggae Girlz found their rhythm in the second half and placed the home team under pressure. Despite numerous chances, they could not put the ball in the back of the net from open play. They would get their reward from a set-piece as a free kick from Andrene Smith found Wilson and she bundled her effort over the line to give the Girlz the lead with 20 minutes to play. Jamaica managed to avoid any late game collapses and secured the win in the first minute of stoppage time as Atkinson muscled her way through to get on the end of a Shaneil Buckley pass to score her second goal of the tournament.

Jamaica are tied with fellow qualifiers Canada on six points but are second in the group because of Canada's superior goal. Canada beat Bermuda 5-0 in yesterday's early game in the group. The Canadians had defeated the Dominican Republic 10-0 in their opening game.

The Girlz will face Canada tomorrow to determine the Group F winners.