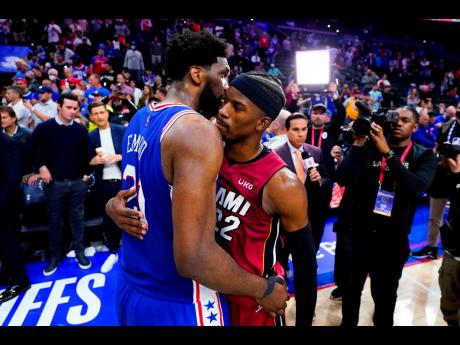 Jimmy Butler knocked Joel Embiid out of the playoffs, then walked over to his former 76ers teammate and hugged him, told him he loved him and was proud of him.

Butler then walked off a familiar court a winner -- and straight into another conference finals with Miami.

"Now I'm where I belong," Butler said. "Guess where I should have been a long time ago."

Butler scored 32 points and waved "bye bye" to the Philly crowd as he sent Miami into the Eastern Conference finals with a 99-90 victory over Philadelphia on Thursday night in Game 6.

The Heat will play the winner of the Milwaukee-Boston series. The defending champions Bucks lead that series 3-2, with Game 6 on Friday night in Milwaukee.

The Heat reached the conference finals for the second time in three seasons, again with Butler leading the charge. Philly fans -- and many inside the 76ers organisation -- still can't believe the franchise let Butler get away after the 2019 season. He did not mess around and scored 14 points on 6-of-9 shooting in the third quarter when the Heat used a 16-2 run to take control. Butler scored 33 points in Game 3 and 40 in Game 4 and took 29 shots in Game 6.

"I think he's one of the ultimate competitors in this profession," coach Erik Spoelstra said. "He was brilliant all series long. The challenges only get tougher here. He saw there was an opportunity to end this tonight and he wasn't going to let this get to seven."

Embiid, the NBA scoring champion, had no significant help and scored 20 points on 7-of-24 shooting.

Coming off a 35-point victory in Game 5, the Heat wore down a battered Sixers team. Embiid looked gassed as he gamely tried to carry the Sixers. He had little lift and had a pull-up jumper blocked by Bam Adebayo in the third.

The Sixers parted with Butler in large part because they chose Ben Simmons over him. Simmons was unhappy and forced a trade this season to Brooklyn for James Harden. Harden, a three-time scoring champion, was supposed to shoulder the load with Embiid for a potent postseason push. Harden instead all but disappeared in the playoffs. He had a fantastic Game 4 at home against Miami but otherwise was a turnover machine. When he lost another ball that led to a Heat bucket and an 80-63 lead in the fourth, the Sixers were booed off the court.

"We tried to go for it right away," Harden said. "We just came up a little short."