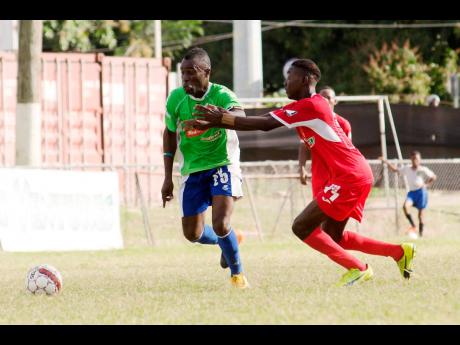 In this file photo from January 2018, Montego Bay United’s Dwayne Ambusley (left) shrugs off Boys Town’s Shaquille Bradford to keep possession of the ball during their Jamaica Premier League game at the Barbican Sports Complex.

Like Superman coming to save the day, Montego Bay United (MBU) assistant coach Dwayne Ambusley came out of retirement to help his team when they needed him most.

Ambusley, 41, the STAR of Week 17, came out of retirement to help solidify the midfield in their 2-2 draw with Arnett Gardens on Sunday. Montego Bay fell behind twice, thanks to strikes from Marlon Allen and Gerald Neil, but goals from Nevaun Turner and Kristoff Murray helped to end a six-game losing strike and earn their first point since March 20.

The superhero comparisons were not lost on Ambusley, who embraced the dual role.

"I stepped in to fix a problem and got out," he told THE WEEKEND STAR. "I stepped in as Superman and moved out as Clark Kent."

That problem was a lack of depth in central midfield because of injuries and a team that was low on morale after a difficult season and a losing streak that was on the verge of continuing. But Ambusley said that an inter-squad session days before the Arnett game gave the coaching staff an idea to turn things around.

"I was playing on the B team and the B team was winning 3-0, and that was the team preparing to play Arnett on Sunday," Ambusley said. "So the first team coach (Leacroft Lettman) moved me from the B team to the A team and, when he moved me, the A team was winning comfortably again. So he said 'it seems as if you are making a difference there'. So he was asking the players if they would want me to play with them. Surprisingly, everyone said yes."

The vote of confidence from his team made it easier for him to dust off his football boots and return in a playing capacity for a team that he spent the majority of his career playing for.

"I knew that I could use my experience and control the players around me," he said. "I told them to just be my legs on the field and I will be their brain. And they rose to the occasion. I have to give the players credit for how they stood by me and did the extra running where necessary."

Ambusley hopes that the result will give them the injection of confidence needed to finish the rest of the season strong. When asked about the chances of another cameo, he was coy with his response.

"You know that Superman appears when he is needed," he said. "So you don't know. So, at this moment, I am Clark Kent, doing my job as a coach. Come any given Sunday, I might be Superman."