God Of Love a lock for Pari-Mutuel Trophy 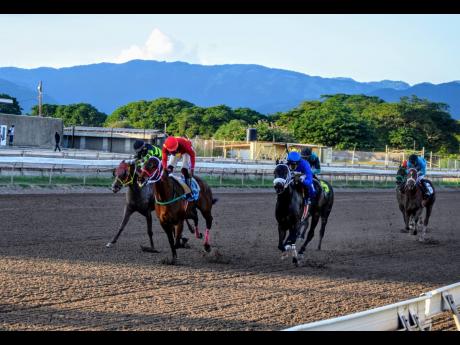 GOD OF LOVE should make it two-in-a-row, returning up in class, but on favourable terms at a friendly trip, facing DUKE and GO DEH GIRL in Saturday's Pari-Mutuel Trophy going five furlongs straight.

The six-year-old speedster went all the way with Robert Halledeen last Saturday, turning back imported LURE OF LUCY on the headline before running out an unperturbed three-and-a-quarter length winner ahead of LABAN at five furlongs round.

The non-restricted overnight allowance suited GOD OF LOVE, who had warmed up two weeks earlier with a third-place finish at the level, chasing out-of-class MAHOGANY into the lane at six furlongs but had to watch Ian Parsard's fearsome runner spit out a final time of 1:11.1.

Though drawn at post-position one, the small six-horse field ensures the gate will be centred, effectively putting GOD OF LOVE closer to mid-track for him to quickly clear slower DUKE on his outside before getting the bead on GO DEH GIRL, who is widest at stall six.

The handicaps are against DUKE, who lugs 126lb, allowing GOD OF LOVE pounds at a trip he relishes. Though DUKE has won at the distance, he does take a while to get rolling against quicker horses, a luxury he can't afford with topweight at five furlongs straight.

Hunting back-to-back wins last time out, DUKE had to wait until FATHER PATRICK, who was slowly away, quit on the lead before pouncing a furlong, only to be outfinished by KING ARTHUR closing along the rail at six furlongs.

GO DEH GIRL's last win was at five furlongs straight, beating RACE CAR and RAS EMANUEL in an event which most thought would have been easily won by SHE'S MY DESTINY. Though she's a versatile runner, GO DEH GIRL isn't an outright sprinter in the mould of GOD OF LOVE. She literally inherited that win from SHE'S MY DESTINY's inexplicable flop and should have done way better against RACE CAR, who was allowing her seven pounds off an 18-month lay-up.

Before losing to FURTHER AND BEYOND and MAHOGANY in back-to-back races, GOD OF LOVE had chased home his late stablemate, PATRIARCH, in three consecutive sprints, never worse than second at any stage of those races.