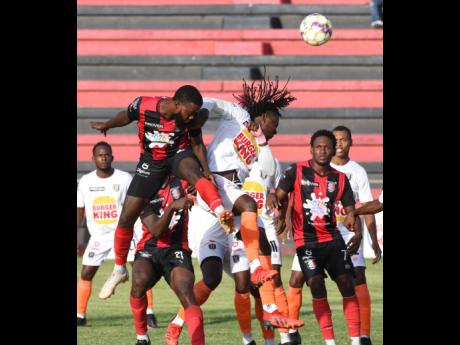 Arnett Gardens’ Kimani Arbouine (left) and Tivoli Gardens’ Rodico Wellington duel in the air for the ball during their Jamaica Premier League game at the Anthony Spaulding Sports Complex in Kingston yesterday.

Kimani Arbouine put Arnett ahead in the sixth minute, but Rodico Wellington equalised from the penalty spot in the 13th minute. Cephas put Arnett back in front three minutes later, before sealing the win two minutes from the break.

The two goals put Cephas on 10 for the season and in the thick of the Golden Boot race.

Arbouine gave Arnett the early lead when his attempted cross caught Kewon Watkins going the wrong way and the ball ended up inside the near post. Tivoli drew level when Warner Brown was brought down in the box and Wellington made no mistake from the spot.

However, Cephas quickly restored Arnett's advantage when he squeezed the ball between Watkins and his near post three minutes after.

Arnett continued to have the better of play and two minutes before the interval Cephas cut inside of defender Barrington Pryce and fired past Watkins.

"The first goal I caught him (Watkins) cheating so I went for it," Cephas said. "The second goal from a cut inside and I knew the keeper would look for me to go wide, so I just [went] to the near post."

Mount Pleasant's Daniel Green leads the goal-scoring chart with 12 goals followed by Atapharoy Bygrave with 11. Cephas and Nicholas Nelson are on 10 and Cardel Benbow on nine.

Arnett Gardens climbed back into third with 39 points, one more than Mount Pleasant who slumped to a 3-1 defeat to Cavalier. Humble Lion also turned back Dunbeholden 3-1, and Portmore United defeated Molynes United 1-0.

Tivoli are joined on 25 points by Humble Lion with their win over Dunbeholden. Tivoli will hope Harbour View does not beat Montego Bay at the same venue at 7:30 tonight, or they will slip out of the top six. Vere face Waterhouse in the opener at 5:30 p.m.