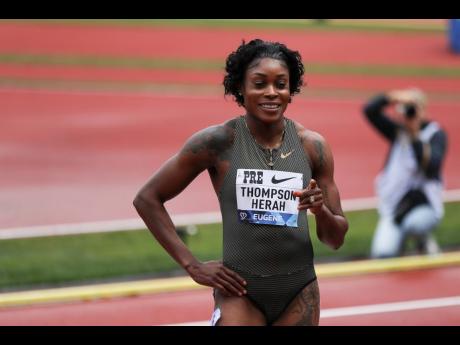 Jamaica’s Elaine Thompson Herah poses for photos after her win in the women’s 100m during the Prefontaine Classic track and field meet in Eugene, Oregon, on Saturday, May 28.

The two will compete in the 200m against Shaunae Miller-Uibo of The Bahamas, Dina Asher-Smith of Great Britain, Mujinga Kambundji of Switzerland, and Marie-Josee Ta Lou of Ivory Coast.

The event, at Stadio Olimpico, will present a chance for Thompson Herah to go below the 22-second mark as she is yet to do so in 2022.

Thompson Herah opened her 200m season with a 22.55 seconds run at the JAAA /SDF Jubilee series meet at the National Stadium in Kingston, Jamaica, in May.

Jackson clocked 22.07 seconds in her opening 200m race of the season to finish second behind American Gabrielle Thomas, who equalled the meet record 21.98 seconds set by Allyson Felix in 2015, at the Diamond League meeting in Doha in May.

Namibia's Christine Mboma has the women's 200m world lead with a time of 21.87, clocked in Gaborone, Botswana, on April 30.

Other Jamaican women competing today are Natoya Goule in the 800m; Britany Anderson, Megan Tapper, and Danielle Williams in the 100m hurdles; and Rushell Clayton and Janieve Russell in the 400m hurdles.

Jamaica will have only two men on show at the event with Nigel Ellis competing in the 100m and Christopher Taylor running the 400m.