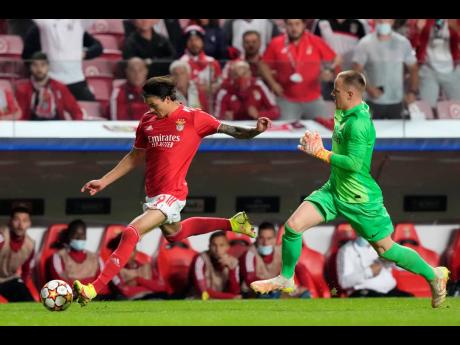 Liverpool has reached an agreement with Benfica for the signing of Uruguay striker Darwin Nunez for an initial fee of PS64 million, the Portuguese club said yesterday, in a transfer that would further shake up Jurgen Klopp's attacking options.

In a brief statement to the Portuguese stock market, Benfica said the transfer sum could rise to PS85 million based on variables. Nunez, 22, has yet to agree to terms with Liverpool, Benfica said, while the English club hasn't commented on the transfer.

The arrival of Nunez, who scored 34 goals in 41 matches for Benfica last season including two against Liverpool in the UEFA Champions League, could spark more changes in Klopp's frontline.

Sadio Mane has been heavily linked with a move to Bayern Munich, and that potential transfer could be accelerated once Liverpool signs a replacement.

Nunez, a tall and technically gifted striker, will offer something new to the attack of Liverpool, which has relied on the mobility of a smaller forward line containing Mohamed Salah, Mane, Roberto Firmino, Diogo Jota and Luis Diaz.

Jota and Diaz have joined in the last two years. Salah and Firmino both have one year left on their contracts.

Nunez has made 11 appearances for Uruguay and would follow in the footsteps of compatriot Luis Suarez in playing for Liverpool. Suarez was at Anfield from 2011-14.

Klopp spoke of his admiration for Nunez last season after the striker scored in both legs of Benfica's Champions League quarter-final loss to Liverpool. Klopp's team beat Benfica 6-4 on aggregate on the way to the final, where it lost to Real Madrid.