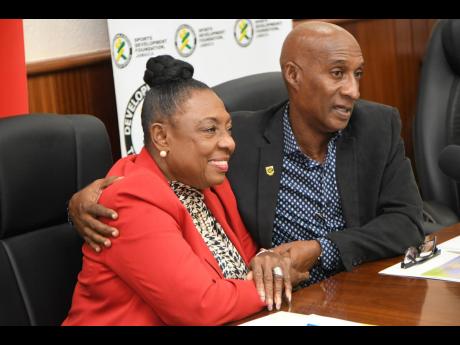 Olivia Grange (left), Minister of Culture, Gender, Entertainment and Sport, and Garth Gayle, President of the Jamaica Athletics Administrative Association (JAAA) at yesterday’s press launch of the 2022 JAAA National Senior and Junior Championships at the JAAA headquarters on Tremaine Road in St Andrew.

Jamaica Athletics Administrative Association (JAAA) President Garth Gayle said yesterday that they will be looking to improve their existing corporate sponsorship partnerships after they got another injection of government financial support.

Sports Minister Olivia Grange said that the JAAA would get $25 million as part of the Government's continued efforts to support the association in its staging of the championships.

"We will be making a significant contribution to support the JAAA. You are asking for $25 million, consider it done," Grange said.

Gayle said that while appreciative of the continuous support by the sports ministry, they are looking to improve their existing partnerships to ensure sustainability.

"I must thank the sports minister. Our minister continues to be of great help to us. We have had some good partnerships. Some have faltered. We are now looking as quickly as at the end of the championships to see how we can engage some of our partners in a meaningful way," Gayle told STAR Sports. "The show must go on and we are doing our best to manage accordingly."

The JAAA received $10 million from the Sports Development Foundation to put on the JAAA/Jubilee series meets. While not stating the total cost for meets this season, Gayle, in giving a small indicator of their financial situation, said $3 million was spent to stage the June 11 All-Comers meet held at Jamaica College. He said that they are exploring other avenues for corporate support.

"We still do need new and more partnerships and we are always ready. Because once we start a partnership, we don't want it to end. We want to continue as long as the partner is happy," Gayle said.

Meanwhile, Gayle said that the senior team for the World Championships will enter into a national training camp on July 10 at a location in Eugene, site of the meet, and would enter into the village on July 15, the opening day of the championships.