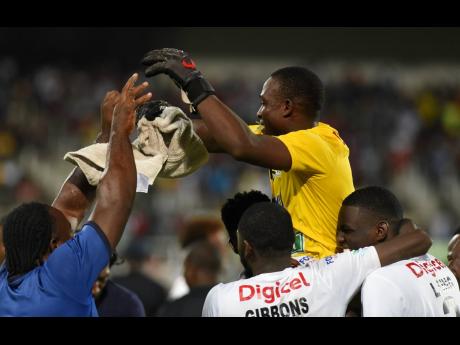 Cavalier goalkeeper Vino Barclett was the toast of his team after saving two penalties against Mount Pleasant in their Jamaica Premier League second leg quarter-final at Sabina Park yesterday.

However, when regulation and extra times failed to separate the teams, penalties were required and Barclett denied Donovan Segree and Daniel Green in the penalty shootout, which the defending champions won 4-3 to book their place in the last four.

Barclett said he studied Green's penalty kicks the previous night and had no hesitation when the national forward step up to take the final kick, needing to score to keep his team alive.

"He has taken some penalties in the league, so I watched him last night, Barclett told THE WEEKEND STAR. "I viewed some of his past games and I just knew he was going there and I just went out full force."

Barclett said that his team had confidence in him and he tried his best to repay their faith in him.

"I feel great about that because my teammates believe in me. I made a couple mistakes because I dropped focus at some point in the game and that happened, so I had to do a little refocus but I made amends for those mistakes.

"We are the defendant champions but we are also underdogs, but we want it and we are going for it."

Cavalier dominated possession while Mount Pleasant was always dangerous on the break. However, both teams had good chances to snatch the win in regular and extra-time.

With Cavalier 1-0 up, Ronaldo Webster had a great chance to add a second minutes later, but he blasted over the bar.

Ladale Richie then missed a sitter when he kicked a loose ball straight to Vino Barclett from seven yards out.

However, in the 35th minute, Green ran through and fired home the equaliser.

Trivante Stewart wasted two great chances for Mount Pleasant in the second half, while Green headed a sitter wide after a spill by Barclett.

Dwayne Atkinson had two chances in extra time, but he kicked the first wide. His other effort was thwarted by an alert Akel Clarke of Mount Pleasant.

Cavalier technical director Rudolph Speid said they were prepared to go all the way, while praising Barclett.

"We brought on fresh legs at the end to try and get the goal, but it didn't happen," Speid said. "One of the ways to win games is to take penalties, and we were prepared.

"Jeadine [White] is a good penalty saver, but you cannot fault this one (Barclett), he saved two."

In the other game played on the day, Harbour View defeated Arnett Gardens 8-7 on penalties after a 1-1 draw at the end of extra time. Shamari Dyer got Harbour View's goal in the 33rd, and Earl Simpson had Arnett's equaliser in the 67th.