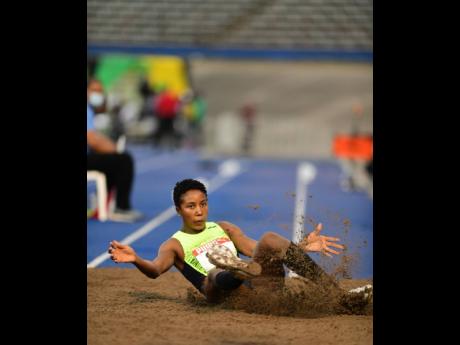 World Championships triple jump silver medallist Shanieka Ricketts is hoping to win another medal at her fourth championships next month and has urged Jamaican fans to give more support to field events.

"I am just grateful to be heading to my fourth World Championships, I was lucky enough to win a silver medal in 2019, hopefully, this year I can be on the podium again," Ricketts said.

Kerry Lee-Ricketts, husband and coach of Shanieka Ricketts, said their main focus is to win another medal.

"Our plan is to get on the podium in Eugene. It's a long season, there is the World Championships, Commonwealth Games and three more Diamond Leagues," he said. "All I'm trying to do is just to keep her healthy throughout the season."

Ricketts, who has a personal best of 14.98 metres for the triple jump, said although Jamaicans are more interested in the track events, especially sprints, she sees where the quality and quantity of Jamaican athletes are improving in other areas of athletics.

"I think with all the talent we have seen in the jumps, shot put and across all field events we have to basically sell ourselves by performing well so Jamaica will come on board and give us the support that we need."

Ricketts said triple jump had faced a global downturn recently but with improved marketing she thinks the event can get the attention it deserves.

"I think we got a big downturn in 2019 when the event was removed from the Diamond League, I think it has a lot to do with marketing," she said. "On TV we see a lot of advertisements. We see a lot of track and field being covered, but sprints mainly. I think the Jamaican media can do more to highlight the performances of field event athletes on the international scene, at the Diamond League and stuff like that. And I think just by being more visible in the media, people will buy into the dream as well."

Ricketts won her fourth national title at the recently concluded JAAA National Senior and Junior Championships with a jump of 14.27m.

She is currently ranked sixth in the world with a season's best of 14.52m and is the only Jamaican woman so far over the automatic qualifying standard of 14.32m for the World Championships.