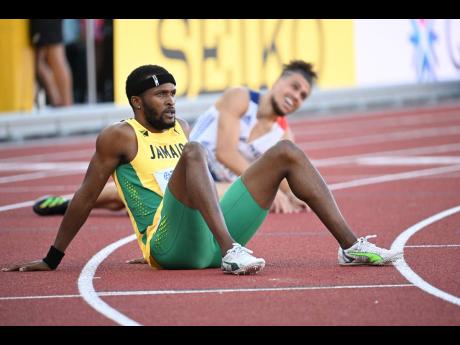 Jaheel Hyde of Jamaica, moments after clocking a personal best 48.03 seconds for sixth in the men’s 400 metres hurdles final, at the World Athletics Championships in Eugene, Oregon last night. 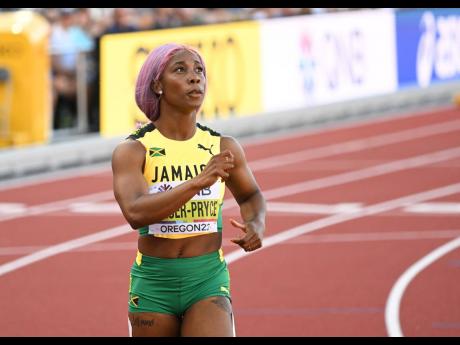 Shelly-Ann Fraser-Pryce looks at the clock after storming to a fast 21.82 seconds to clinch her semi-final heat at the World Athletics Championships in Eugene, Oregon last night. 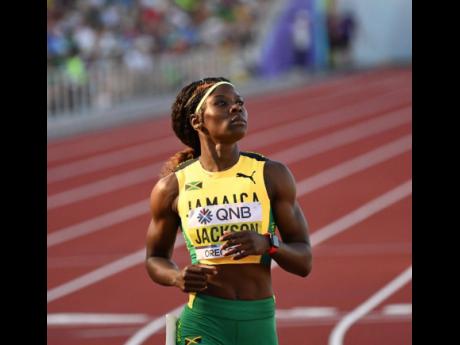 Shericka Jackson looks at the time after clocking 21.68 seconds to win her semi-final heat of the women’s 200 metres at the World Athletics Championships in Eugene, Oregon last night.
1
2
3

Shelly-Ann Fraser Pryce has the opportunity to complete the World Athletics Championship sprint double for the second time in her career.

Fraser-Pryce ran a season's best 21.82 seconds to win her 200 metres semi-final heat yesterday putting her in tomorrow's final. Fraser-Pryce while critical of the scheduling with minimal recovery time, said that she just had to ensure she did her job to qualify.

"For me, it takes a toll because I am a lot older than most of the girls and my recovery takes a little bit longer. So I try to recover as best as I can to execute a good 200m," Fraser-Pryce said.

World Championship 100m silver medallist Shericka Jackson won her semi-final in 21.67 the fastest time in the field while double sprint Olympic champion Elaine Thompson Herah finished third in her semi-final also in a season's best, 21.97 setting up another potential sweep of the event.

Hyde said that while he was pleased at getting a personal best, his experience in the final has only motivated him to get back to work.

"I'm a bit disappointed because I had a chance at a medal but fell short in the straight. But there is a whole lot of work to be done for the rest of the season. We just have to stay positive. But I am very happy," Hyde said. It is the second time that Hyde has reached the 48-second mark this season.

The 200m campaign for Jamaica's men ended as former 100m World champion Yohan Blake withdrew from his semi-final because of a foot injury. Rasheed Dwyer finished eighth in his semi-final in 20.87, failing to advance to the final.

In their first global championship final, national record holder Lamara Distin and national champion Kimberley Williamson finished ninth and 11th, respectively, in the women's high jump final. Distin's best clearance was at 1.93m with a perfect card but could not clear 1.96. Williamson's best clearance was 1.89m and could not clear 1.93, her personal best which she set in June. Australian Elanor Patterson won the title with a national record of 2.02m. Ukrainian Yaroslava Mahuchikh was second with the same mark while Elena Vallortigara of Italy was third with 2.00m.

World championship silver medallist Fedrick Dacres and Travis Smikle finished ninth and 12th, respectively, in the men's discus final. Dacres' best effort was 64.85m while Smikle's best was 62.31m. The event was won by Slovenia's Kristjan Ceh with a championship record of 71.13m. Mykolas Alekna of Lithuania finished second with 69.27m while his national teammate Andris Gudzius was third with 67.55m.