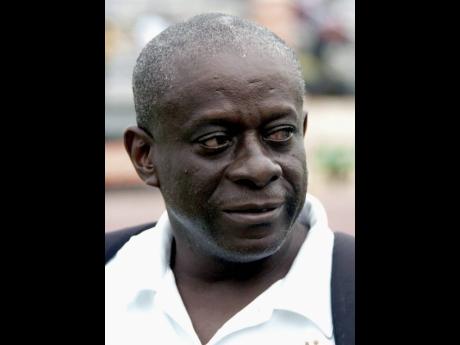 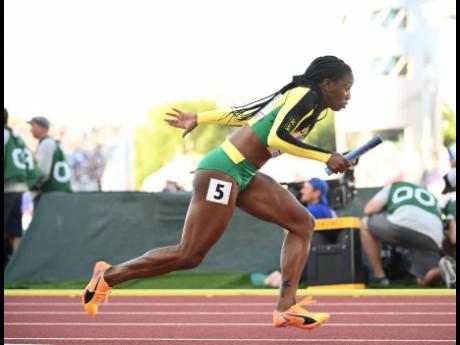 Sprinter Kemba Nelson gets out of the blocks on the first leg for Jamaica in the women’s 4x100m relay final at the World Athletics Championships in Eugene, Oregon, on Saturday. Jamaica finished with the silver medal. 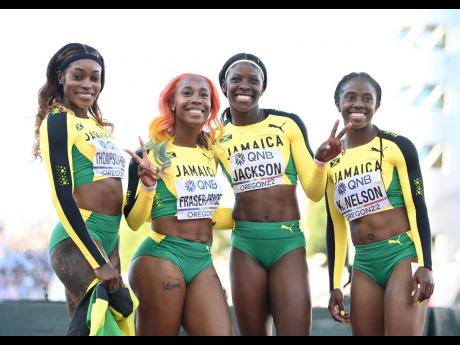 Another World Athletics Championships has ended and, from the 10 days of competition, it was another classic performance from the country's athletes. They finished with 10 medals, consisting of two gold, seven silver, and a bronze, which resulted in a third place finish on the medal table. With several other athletes making it to the finals of their events, it was a also second-place finish on points for the country.

Despite failing to match their 12 medal haul from Doha 2019, it was indeed an excellent performance from the team, especially the females, who garnered nine of these medals. Once again, at a major global championships, we produced the three fastest female sprinters on the planet with Shelly-Ann Fraser-Pryce, Shericka Jackson, and Elaine Thompson Herah ending one-two-three in the women's 100m final to match the sweep of the Tokyo Olympic Games a year ago.

On the eve of our Independence celebration, it was indeed a timely birthday gift for the country. While most Jamaicans were celebrating the success of the athletes, there were a few who were tearing them down after the result in the women's 4x100m relay final, where the team took silver, with first-time senior representative Kemba Nelson coming under pressure from these unruly and ungrateful people.

The Jamaicans were odds on favourites to win the event and the world record of 40.82 seconds, done by the United States in 2012 at the London Olympic Games, was definitely under threat, but an error on the first exchange between Nelson and Thompson Herah thwarted those hopes. Despite an excellent anchor leg by Jackson, the 200m champion, the team finished just four-hundredths of a second behind the United States. These unkind fans took it out on Nelson on social media with rude remarks, forcing her to shut down her Twitter account because they said that she should not have been on the team, as Briana Williams, who ran the first leg when Jamaica won gold in Tokyo last year, should have been reinserted at the start on Saturday.

What these fans fail to recognise is that a National Championships (Trials) was held in June to select the team and in the 100m final, Nelson finished second in the event behind Jackson as Fraser-Pryce, the reigning world champion, had a wild-card entry to Eugene in the event. Nelson, who ran both the preliminary round and the semi-final, surely deserved her spot on the relay team, as that is the reason why Trials was held - to select the team. Once she was not injured and showed good form, she could not be removed, so the only question was where she would be placed on the team.

She ran the anchor leg in the semi-final and with the big-three names back, she was inserted to lead off the team. This is where I think the coaching staff dropped the ball, as it was not Nelson who put herself to start the relay. Both Nelson and Thompson Herah were the two slowest members of the four on the team. Thompson Herah, who was in 10.5 shape over the 100m last season, was not in that devastating form this time around, based on her results in both the 100 and 200 metres. Running Nelson to Thompson Herah was always going to mean catching up for the Jamaicans, as the United States and Great Britain both had quality squads. The best option was to have Jackson on the second leg, which in these relays is the longest leg, and being the 200m champion, she would have definitely put the team in front and the end result could have been a win, and possibly a world record.

Despite the outcome, the young ladies ran their hearts out and finished second for silver, and must be commended for their effort, not chastised. It is some of these same fans who were not satisfied with the win in Tokyo, as they think the team should have broken the world record. Most of these fans do not know the sacrifices these people have made to be on the national team. Whatever the outcome, they must be respected, as it is indeed an honour to represent the country at the highest level. Instead of the rude comments on social media which was aimed at the first-timer Nelson, they should have encouraged her and given her full support in her debut at a major global championships, as she is one for the future.

Raymond 'KC' Graham is a hurdles coach that has not only trained many Jamaican athletes at the youth level, but has also travelled with various national teams to major global championships for a number of decades.