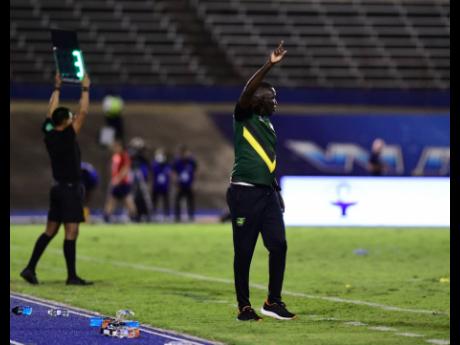 Mount Pleasant Football Academy has announced Theodore Whitmore as its new coach ahead of the next Jamaica Premier League (JPL) season.

Whitmore, 49, will be back on the touchline after leaving his role as head coach of the national senior men's football team in December.

He says he knows the job will not be easy but he is ready for the challenge.

" It will be a challenging task, but one that I am up to and I am looking at this appointment as an important way of contributing to the development of Jamaica's football," Whitmore said in a statement released by the club yesterday.

Mount Pleasant says Whitmore is of a high calibre and describes his appointment as critical to advancing the club's sporting goals.

"Coach Whitmore is charged with building on the strengths and successes of the club over the past four years," the club said. "The club, having been promoted to the Jamaica's top tier four seasons ago, has been steadfast in building our foundations and ensuring there is a platform for not only success but continued growth."

Whitmore coached Seba United, now known as Montego Bay United, to the national title in 2007, before three stints as Reggae Boyz head coach. In his time with the national team, he guided it to a Caribbean Cup title in 2010, then a final in 2017. He also guided the Reggae Boyz to the Concacaf Gold Cup final in 2017, where they lost 2-1 to the United States of America.

Mount Pleasant, who were guided by Englishman Wally Downes last season, then compatriot Nicky Eaden, finished fourth in the preliminary round of the JPL season. They were, however, beaten on penalties by Cavalier in the quarter-final round.