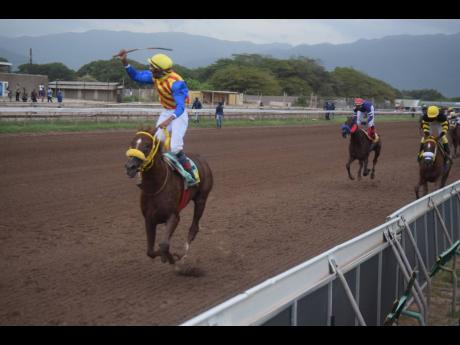 ATOMICA's flashy 1:25.3 at exercise last Sunday has reignited the filly versus colt saga for Saturday's Jamaica Derby despite BLUE VINYL's convincing victory at 10 furlongs in the St Leger a month ago.

Unbeaten in five starts heading into the St Leger, ATOMICA's fast-time victory against her sisters in the 1000 Guineas, an eye-popping 1:37.0, coasting home by almost 17 lengths, convinced bettors to go against the adage of 'a good colt will always beat a good filly', making her the 1-5 favourite over BLUE VINYL at 7-5.

Though somewhat lightly trained for her first-ever two-turn event - not to mention facing the country's best colts and geldings, ATOMICA, considering she was roughed up leaving the gate, a furlong after at the winning post and on the clubhouse turn - still ran a helluva race for second to BLUE VINYL, who continues to improve with every race he gets in under his girth.

BRINKS got a dream draw against the rail and led the St Leger for the first three furlongs before ATOMICA pounced entering the backstretch. However, for the first time in her career, ATOMICA was kept honest to the half-mile pole, pressed by BRINKS, after which BLUE VINYL got into gear and made his bid at her three and a half out.

Eyeballed by the colt leaving the three-pole, ATOMICA was again in uncharted waters, having to be pushed coming off the home turn, Dane Dawkins giving her a stinging reminder of the whip two furlongs out. However, BLUE VINYL was already all over her and in control within a half-furlong, pulling away at the end.

With BRINKS still in the neighbourhood, plus an additional two furlongs, for ATOMICA to win the derby, BLUE VINYL would have to underperform, a misstep he has not made in his last three outings while looking better at exercise.

Though he's not as flashy as ATOMICA, BLUE VINYL's exercise regime has been no less impressive. Training for the 2000 Guineas, he had galloped 1:43.4 out the mile chute. For the St Leger, he also galloped a mile out the chute, clocking a slower 1:46.3.

Primed for the derby, BLUE VINYL posted 1:44.0 on the round last Thursday morning, not the chute, after cantering from the furlong pole. Not many grade one horses in training could have pulled off the distance work BLUE VINYL put in last Thursday, making him the horse to beat at 12 furlongs and a Triple Crown champion in waiting.