Thompson Herah: I am one of the greatest sprinters of all time 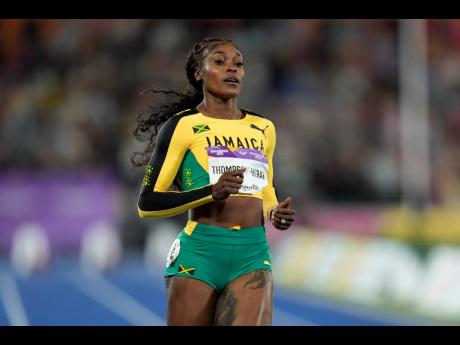 Jamaica’s Elaine Thompson-Herah crosses the line to win gold in the women’s 100m final at the 2022 Commonwealth Games in Birmingham, England yesterday.

Elaine Thompson Herah put any disappointment from the recent World Championships behind her by storming to an emphatic victory in the Commonwealth Games 100 metres final yesterday.

Jamaica's double Olympic Games champion finished third behind compatriots Shelly-Ann Fraser-Pryce and Shericka Jackson in the Eugene World Championships but there was no stopping her in Birmingham as she hit the line in 10.95 seconds. Second in the event was St Lucia's rapidly rising 21-year old national record holder Julien Alfred in 11.01, while England's Daryll Neita was third in 11.07. Jamaica's second finalist in the event, Natalliah Whyte, finished eighth in 11.32.

Thompson Herah has earned great kudos for appearing at a championships which has been starved of some of the world's best track and field stars.

But the 30-year old second-fastest woman of all time and quickest currently alive commented:

"I have to give God thanks for being able to come off of one championship where I had to run many rounds to another with many rounds.

"It's been a challenging season but I've managed to pull through. Sometimes to be a champion you have to challenge yourself.

"I know what I'm capable of and I know that I'm one of the greatest sprinters of all time.

"I believe in showing up and putting on a show and to get back on top was difficult but I still managed to claim two medals at the World Championships and so far one here and I am grateful for being able to do that." Jamaica earned a second medal on the day to bring the country's tally to three. Seven-time national shot put champion Danniel Thomas-Dodd recovered from her 10th-place finish at the recent World Championships to grab a silver medal in the event.

Thomas-Dodd led until the final round and but was clipped for gold by Canada's Sarah Mitton who produced a 19.03 metres throw in her final attempt to eclipse Thomas-Dodd's 18.98m mark.

Lloydricia Cameron, Jamaica's second representative in the final, was fourth with 17.62m.

Cox won heat one in 45.51, Allen took heat two in a season's best 45.18, while national champion Powell finished second in his heat in 46.14. The semi-finals are set for tomorrow at 3 p.m. Jamaica time.

In men's 800m, Jamaica's Navasky Anderson managed to secure a non-automatic qualifying time for the final. Anderson finished third in his heat in 1:47:79. Australia's Peter Bol won the heat in 1:47:01.