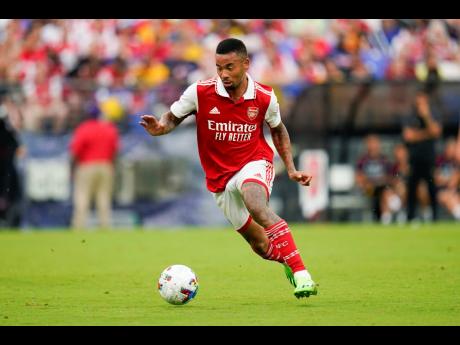 Arsenal’s Gabriel Jesus runs with the ball during a preseason friendly against Everton on July 16, 2022 in the United States.

In England, Arsenal are playing in the the Friday night Premier League opener for the second straight year and will be hoping for a better start to the campaign than they had last season, when they lost 2-0 at newcomers Brentford.

This time, the Gunners are visiting another London club in Crystal Palace, managed by former Arsenal great Patrick Vieira. Palace beat Arsenal 3-0 at home last season, but Vieira is worried his roster is "quite a bit short on numbers" because of injuries. Arsenal, meanwhile, have looked in stellar form in the preseason with new signing Gabriel Jesus leading the attack, giving fans hope that Mikel Arteta's team can reclaim a Champions League spot this season after finishing fifth in the previous campaign. Jesus and Oleksandr Zinchenko, who also joined from Manchester City in the offseason, are likely to make their competitive debuts for Arsenal.

In Germany the Bundesliga's new season starts with perennial defending champions Bayern Munich visiting Europa League winners Eintracht Frankfurt. Bayern have reinforced their squad strongly to compensate for Robert Lewandowski's summer departure, and the pressure is on coach Julian Nagelsmann to deliver more than "just" the Bundesliga in his second season in charge. Bayern have won the last 10 league titles, a record. New arrivals Sadio Mane, Matthijs de Ligt, Mathys Tel and an established cadre of stars ensure Bayern are the favourites for yet another league crown. Mario Gotze could face his former side today. Frankfurt signed the German World Cup winner in the offseason giving him a chance to rekindle his career at age 30.

This summer, Lyon signed left back Nicolas Tagliafico from Ajax Amsterdam, midfielder Corentin Tolisso from Bayern Munich, striker Alexandre Lacazette from Arsenal and promising youngster Johann Lepenant from Caen. Lyon will miss full back Henrique, who is suspended, as well as Maxence Caqueret, Jeff Reine-Adelaide and Romain Faivre due to injuries.