Fowler: We felt we put on a good performance 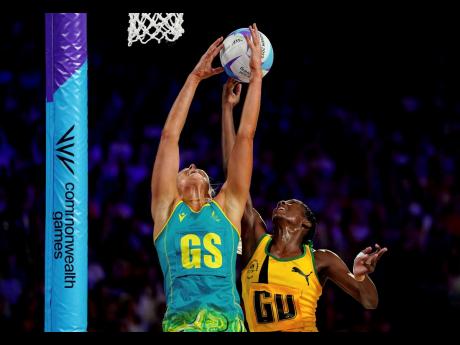 "We are so indebted to the crowd for coming out and supporting us the way they did - it was so humbling - and we felt we put on a good performance without quite making it over the line this time," Fowler said.

She added: "This has done so much to move us forward and, hopefully, will result in new sponsors coming along to push us even further forward.

"We have done the best we have ever done, and although we are still hungry for more, we are happy to have finished second.

"I reckon we let ourselves down in the third quarter when we let them in and have a run (of goals).

"Last time we were able to rein them in but weren't able to do that tonight."

Despite last Thursday's success against the Aussies, few had Jamaica anything but underdogs which fuelled a fervent support for the black, green and gold from a capacity audience at the NEC Arena in Birmingham.

Australia, who finished with an enormous 501 goals for the tournament, never looked likely to repeat their anguish of four years ago, when, on home soil in Gold Coast, they lost the final to England on the final play.

Nor could Jamaica replicate their historic 57-55 success three days beforehand.

The formidable Diamonds, in their seventh consecutive final and already with three previous gold medals to their name, held a controlling hand from the outset.

Such was the competitiveness, it was almost a minute before Australia scored the first goal as a nerve-racking yet compelling opening period unfolded.

Repeatedly the Sunshine Girls tried to pull away, only for the fired-up and occasionally over-passionate Jamaica team, with five players regulars in Australia's Suncorp Super League, to close the deficit.

The deafening cheers were all for Jamaican success and it was to Australia 14 Jamaica 12 when a pulsating first quarter was brought to a close.

With the imposing figure of Fowler dominating the circle, as she had all week, Jamaica edged into the lead, for the first and only time, midway through the second quarter and briefly held a 22-18 advantage.

Half time arrived with the sides locked at 29 each.

Australia emerged from the longer break with renewed intent and, within the blink of an eye, Jamaica were twice starring down the barrel of a nine-point deficit.

Fowler finished with 46 goals from 47 attempts while Shanice Beckford claimed the other five scores for the Sunshine Girls.