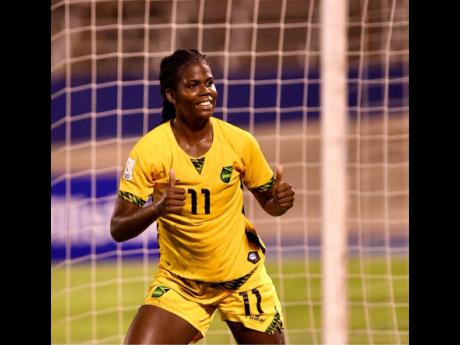 Reggae Girlz' striker and captain Khadija 'Bunny' Shaw continued her summer goal-scoring form yesterday by leading Manchester City to a 6-0 rout of Tomiris-Turan in their UEFA Women's Championships League round one semi-match in Madrid.

Shaw set the game's tone in the first five minutes as she rose to meet Hemp's cross to give City an early lead. Seventeen minutes later, Shaw used her head again to double City's advantage, this time from a Chloe Kelly cross.

City continued to dominate the second half, with Hemp scoring a minute after the restart and a late second-half goal surge from Losada, Castellanos and Walsh secured victory.

Shaw is coming off a debut 2021-2022 season with the Manchester club in which she scored 16 goals in all competitions, including nine league goals, as well as helping to win the Continental Cup and finishing third in the FA Women's Super League.

It was also a busy summer internationally as she led the Reggae Girlz to back-to-back World Cup qualifications at the CONCACAF Women's Championship in Mexico in July when she scored three goals, which tied for most of the tournament with Canadians Jessie Fleming, Julia Grosso and Alex Morgan.

Shaw reportedly drew interest from many-time French championships Paris Saint-German in May amid the departures of Georgia Stanway, Lucy Bronze and Caroline Weir but is set to remain at Manchester City for this season.

Fortune was not, however, kind to national striker Trudi Carter and her Lithuianina club FC Gintra as they suffered a first-round exit, going down 2-0 to Finnish club Kups Kupio.