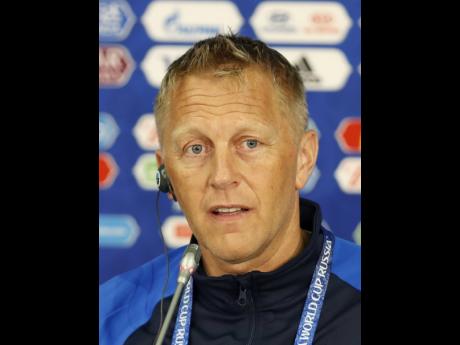 WHEN THE Reggae Boyz run out for their next international engagement, it will be to a new beat as a new coach will be unveiled on Friday.

Fifty-five-year-old Icelander Heimir Hallgrimsson, a dentist, will be the new man in charge and he could be on the island as early as today. Hallgrimsson, the man responsible for guiding Iceland, the country with the lowest population ever to qualify for the FIFA Men's World Cup in 2018, was hunted by chairman of the Jamaica Football Federation's Technical Committee Rudolph Speid.

Speid, while confirming that a new coach is in place and that he was the one who secured him, would not indicate whether the coach was Hallgrimsson or not.

"I can't tell you anything about the coach whether on or off the record," said Speid when contacted by STAR Sports last night.

"There is a coach and we will have to unveil him at some point but I am not the one to tell you anything about him, but I can tell you that the coach is working already," Speid added when asked if the coach had a hand in yesterday's selection of the 29-man squad to face Argentina on September 27 at the Red Bull Arena.

Pressed further, Speid said that president Michael Ricketts is the one to speak with as his job is done.

"My job was to get the coach, I got the coach so my job is done," he said.

Ricketts too would not reveal much except to confirm that the coach would be named at a press conference on Friday.

"I cannot speak to that at this time but I can say that there will be a press conference on Friday and the coach will be announced," Ricketts said.

Hallgrimsson was last employed by Qatari club Al-Arabi, which he left in the summer of 2021 after joining them in December 2018. Before that he coached Iceland from October 2011 as assistant coach to Lars Lagerback and they led Iceland's qualification for the play-off stage of the 2014 FIFA World Cup but succumbed to Croatia.

Lagerback and Hallgrimsson were rewarded with an extension of their contracts but this time they were named joint coaches. Hallgrimsson went solo after Euro 2016 as Lagerback was appointed coach of Norway.

A 2-0 win over Kosovo helped Hallgrimsson to create history with Iceland in 2017 but he would resign following their World Cup experience as they failed to progress past the first round.

Hallgrimson will succeed Paul Hall who was brought in to assist then national coach Theodore Whitmore in 2021. Following the dismissal of Whitmore, Hall was named interim coach for the remainder of the country's failed 2022 Qatar World Cup campaign. Hall, a former Reggae Boy and coach at Queens Park Rangers, qualified Jamaica for the Gold Cup in June and was expected to be in the running for the permanent position.