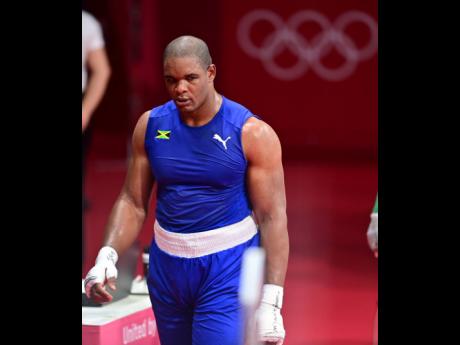 Trainer Dewith Frazer is expressing continued confidence in the abilities of boxer Ricardo 'Big 12' Brown, after the Jamaican heavyweight devastated Mexican champion Carlos Carreon at the CAA Centre in Brampton, Ontario, on Saturday.

Brown continued the impressive start to his career, as after pounding the Mexican for the first two rounds, he put down Carreon with the first punch of the third round to take his professional record to 5-0.

The big Jamaican fulfilled his prefight pledge of stopping the contest inside the distance like in his four previous bouts, which all ended before the third round.

According to Frazer, Spanish Town native Brown is fasting becoming a crowd favourite because of his devastating power.

"Ricardo has the power and intensity that excites people because he likes to go for the kill.

"His confidence is growing, and the biggest problem I have with Ricardo is finding the right sparring partner to elevate him. He's always raring and ready to go like a racehorse, and only needs a track [to perform]," Frazer commented.

He, however, cautioned that the big Jamaican might have to temper his approach against accomplished opponents in future fights.

"He will have to slow it down a bit because some of these guys, even this opponent (Carreon), didn't look like he can fight. But looks are sometimes deceiving. The guy went 12 rounds already, so he knows what he is doing, he knows how to survive.

"Unfortunately for him, Ricardo's physical power and advantage were too much for him," Frazer surmised.

He revealed that the camp has been working on Brown's usual chubby features, with his improved physique and fitness getting good reviews.

"It is not just boxing, but his entire physical appearance. It does matter how you look, and when you walk in a room, you have to have a presence, you have to look like a professional athlete and look like you are ready; and we are getting all those things together for him.

"He has a strength trainer who does the cardio work, and I do the boxing work. So the team around him ensures each time he steps in the ring, he looks better and feels better," Frazer said.

Brown and Frazer are scheduled to fight again on November 12.