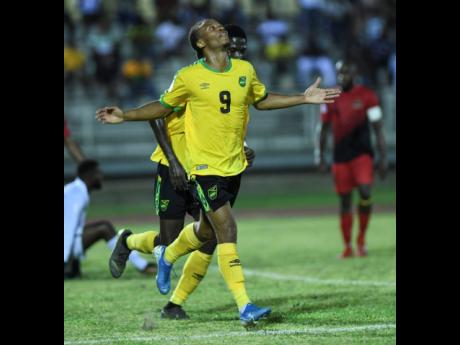 The win lifts Peterborough, who led 2-0 at the break, to seventh and drops their opponents to 20th.

Fellow Reggae Boy Bobby Reid scored for 10-man Fulham in the 88th minute, but his second of the campaign proved to be a consolation as the hosts crashed to a heavy 4-1 defeat against Newcastle United at Craven Cottage in the Premier League.

The 29-year-old Reid's goal came from Fulham's only shot on target as the hosts struggled to get the ball upfield.

Defeat saw the hosts drop to eighth in the table, one place below Newcastle. Their day started poorly when Nathaniel Chalobah was shown a straight red card for a high challenge on Sean Longstaff in the eighth minute.

Newcastle midfielder Joe Willock, who is of Montserratian descent, was lively for Eddie Howe's side, picking up two assists and forcing fine diving saves from goalkeeper Bernd Leno either side of half-time.

Former Jamaica youth international Jevani Brown notched his seventh goal of the campaign as Exeter City were held to a 2-2 draw in League Two by West Country rivals Bristol Rovers.

Exeter equalised after 71 minutes, after going behind on 62 minutes, when Jack Sparkes was hauled down by Anthony Evans and the 27-year-old Brown drilled home the penalty with his favoured left foot.

Exeter then went 2-1 in front in the 82nd minute when Brown lobbed the ball forward, goalkeeper James Belshaw came racing out and missed the ball completely, allowing Sam Nombe to run the ball into an empty goal.

But Ryan Loft grabbed a stoppage-time equaliser for the visitors as he beat goalkeeper Jamal Blackman, who is eligible to play for Jamaica or Barbados internationally, from six yards to earn a share of the spoils.