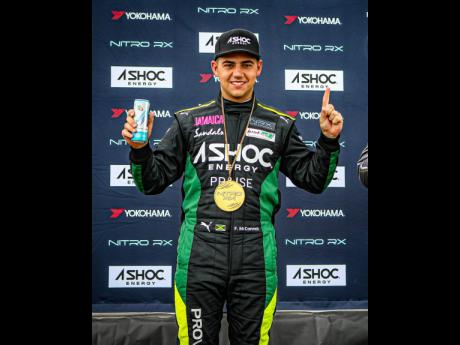 It is not very often that a rally driver experiences a crash the day before an event and comes back the day after to compete and secure a podium finish, but Fraser McConnell did that last weekend.

The Jamaican crashed during practice for round three of the Nitro Rally cross at ERX Motor Park in Minnesota but McConnell was not seriously injured and was fit enough to take his place in the event and he and his team managed to claim third place.

“Being able to get a podium finish after such a rough Saturday is great for everybody - my team, myself and sponsors. It will take much more than that to take me out of the fight,” McConnell said.

“Going into the final raceday was a victory in itself as I was able to drive. Worked all night and I also left the venue quite late but the other guys didn’t sleep as they were fixing the car. Thanks to them I was able to even compete and the car was well built from Qev (Technologies) and Olsbergs MSE. I was very motivated to go back out and show that I can bounce back from something like this. In our our first time back in the car we were immediately turning over some fast lap times.”

Before going into the race he had to be cleared by doctors.

“I went to the hospital and did a full examination and I did an examination with the doctor at the track and was clear. Right from that we just started working on the car and making sure that we were able to race,” he said.

Despite being cleared to compete, McConnell said he is still feelings some discomfort.

“A little soreness in the neck and the back but thank God no serious injuries and I am able to walk and operate at a high standard still,” McConnell explained.

He said although this was a thrilling experience for him, it is something he hopes he will never experience again.

“I wouldn’t really say I am using this experience for going forward. I hope I never experience something like this again. It is good to reassure myself that no matter what happens, I can still put everything aside and focus on the task at hand and go out there and show the world that Jamaica has what it takes to be the best,” he said.