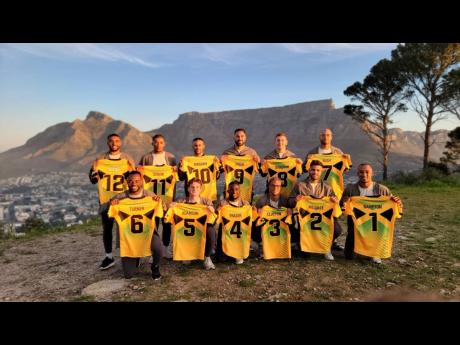 Members of Jamaica’s team to the recent Rugby World Cup in South Africa.

Stalled for over nine months, Jamaica Under-18 Junior Crocs rugby team, along with the senior men's and women's Crocs, will be looking to put in a strong showing at the Rugby Americas North (RAN) Sevens competition, which starts today and ends on Sunday in Mexico City, Mexico.

The Jamaicans recently topped an under-19 tournament involving RAN teams in July, which served as a confidence booster for this championship, which should have been held in February, but was postponed following a decision taken by the RAN Medical Committee and the Federacion Mexicana de Rugby (Mexican Rugby Federation), when there was a surge in COVID-19 cases, owing to the Omicron variant.

This will be the RAN first Super Sevens' week that Jamaica, Cayman Island, and British Virgin Islands' juniors, along with many more countries, will be taking part and Bruce Martin, technical director of the Crocs' Rugby Sevens programme, extended gratitude to the Jamaica Olympic Association (JOA), which played "a vital and integral role" in their contribution to the team being able to attend such an important event

"This is a great deal for the Jamaica Under-18 Junior Crocs that acts as a catalyst to so many more major events for us in rugby," said Martin. "The JOA recognises that this (U18 RAN Sevens) is a result of a pinnacle of many years of hard work and strict dedication for our players on the pathway to dynamic moves in Jamaica Rugby and the JOA equally shares our excitement."

The junior competition gets going on Friday, with Jamaica facing up to Mexico B in the morning opener, then follow up with afternoon matches against the British Virgin Islands and Trinidad and Tobago.

Senior competition gets going on Saturday with Jamaica's men tackling Curacao in the day's opening match, and the women facing the Dominican Republic near midday. The women will next face Bermuda, before going up against hosts Mexico.

With goals as their motivation, the Under-18 Crocs playing in RAN's Super Sevens Week will be focusing firstly on the short-term goal of securing a spot in the Youth Commonwealth Games Summer 2023 tournament in Trinidad & Tobago.

This fits into their long-term goal of qualifying for the 2028 Olympic Games, which will be held in Los Angeles, United States of America.