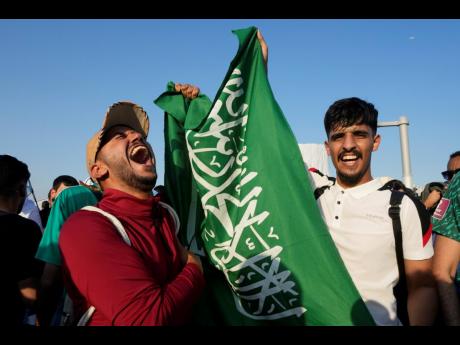 Fans of Saudi Arabia celebrate their 2-1 victory over Argentina in the World Cup Group C football match, outside the Lusail Stadium in Lusail Qatar on Tuesday. Saudi Arabia defeated the more fancied Argentna 2-1.

With a squad full of domestic league players and a French coach, Saudi Arabia's shocking upset of Lionel Messi and Argentina suddenly put them in the international spotlight.

A skyscraper in downtown Doha was lit up with the image of Saudi Arabia's flag Tuesday night as fans throughout the Middle East celebrated the unexpected victory. In London, the Saudi-owned newspaper Al-Sharq Al-Awsat read: "The Green Magicians Defy Expectations".

So just who are these guys?

While Saudi Arabia, the second lowest-ranked in the tournament, don't have a big star like Messi or Cristiano Ronaldo, many of the players were also part of the squad that went to the 2018 World Cup, but none play outside of their home country.

Saleh Alshehri and Salem Aldawsari became instant national heroes with second-half goals in the 2-1 victory over the Argentines. Both play for Al Hilal in Saudi Arabia's top league, as does goalkeeper Mohammed Alowais, who preserved the win with a pair of late saves. All three also played in Russia four years ago.

In fact, 12 players on Saudi Arabia's 26-man roster are with Al Hilal, which has won a record 18 Saudi league championships and is coached by Ramon Diaz of Argentina. Al Nassr boasts six national team players.

Aldawsari scored the winner in the 53rd minute against Argentina, celebrating with a cartwheel and a backflip.

He's one of the best-known players on Saudi Arabia's squad. While he has played for Al Hilal since 2011, he was briefly loaned to Spanish club Villarreal and made one appearance.

Now he owns one of the nation's biggest-ever goals, joining Saeed Al-Owairan, who scored the lone goal in a victory over Belgium at the 1994 World Cup.

Saudi Arabia are led by Renard, a 54-year-old French coach who has jumped around a bunch of national teams.

Before taking over at Saudi Arabia in 2019, he coached Morocco at the 2018 World Cup. He is the only coach to have led two different national teams to African Cup titles: Zambia in 2012 and Ivory Coast three years later.

When Renard started his coaching career, he worked as a janitor and eventually opened his own cleaning company.

"When you are coming into a World Cup, you need to believe in yourself. Everything can happen in football. Sometimes the opponent aren't at their best motivation," Renard said. "This has happened to us when playing a lower-ranked team. This is what other people don't understand."

Al Hilal is one of Asia's top clubs. Based in Riyadh, they went to the Club World Cup semifinals in February, but Chelsea beat them 1-0 on Romelu Lukaku's close-range goal in the 32nd minute. Chelsea went on to win the event, beating Palmeiras in the final.