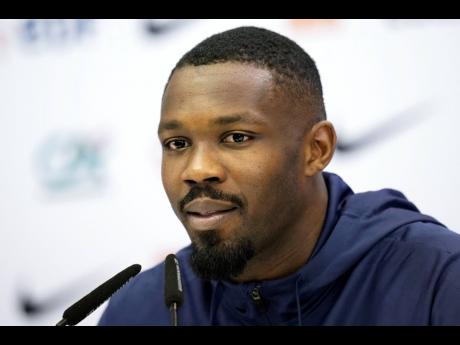 Lilian Thuram was part of France's first World Cup title in 1998 and scored twice in the semifinals to lead Les Blues into the final against Brazil. Marcus Thuram made his World Cup debut on Tuesday in France's 4-1 victory over Australia.

"It's no problem for me talking about him," the 25-year-old said on Thursday. "I'm proud of him."

He was approaching his first birthday when his father scored the only two international goals of his career in the 1998 semifinals, a 2-1 win over Croatia. Lilian Thuram was also part of the defence that beat Brazil 3-0 in the final.

Lilian Thuram also won two Italian league titles with Juventus, as well as the UEFA Cup with Parma, where his son was born in 1997.

It's given Marcus Thuram huge steps to follow in, but he isn't concerned by comparisons in his first World Cup.

"I don't put myself under this kind of pressure. I'm very happy to be here," he said. "Maybe when I look back over my career I'll think about it."

His father is not putting him under any pressure, either.

"He hasn't told me to score twice in a (World Cup) semifinals," Marcus Thuram joked. "But he told me to gain as much experience as I can here and to enjoy the moment."

He did need his father's advice last season when Marcus Thuram lost his form and scored only three goals in 21 games for Borussia Moenchengladbach in the German Bundesliga.

"I had to make sure that my dreams didn't fade away. I spoke a lot to my dad then," the striker said. "I've worked very hard on the mental aspect of my game. I'm playing in a more central role now as a No 9, and that's made things easier for me."

He's scored 10 league goals in 13 games this season and is eager for his first international goal.

"I know I have a responsibility to score goals and I like that," he said.